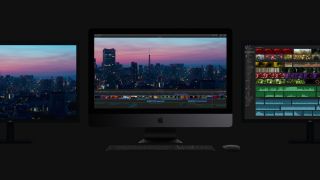 The 2017 iMac Pro features a screen that can display 1 billion colors.
(Image: © Apple)

Apple announced a major update to its iMac computers last week, including a screen that can display 1 billion colors. How does that work, and are there real benefits to having such a color-filled display?

Most of today's consumer-grade displays feature 8-bit color depth, which means they are capable of outputting 256 shades of each of the three primary colors: red, green and blue. All the combinations of these various shades result in 16.8 million possible colors, otherwise known as 24-bit color.

If you increase the color depth, or "bit depth," to 10-bit, then each primary color has 1,024 shades, which results in 1.07 billion possible combinations. This is known as 30-bit color and is what users of the new iMacs will see. [Top 10 Revolutionary Computers]

But what's the point? It makes it possible to show colors with far greater precision and accuracy, said Raymond Soneira, president of DisplayMate Technologies, a New Hampshire-based company that tests and evaluates display technologies.

"This matters visually for accurately rendering dark color content and also for avoiding false contouring where there are slight continuous color shifts within an image, such as when rendering a blue sky late in the day as the brightness smoothly decreases away from the sun along the sky," he told Live Science.

This effect is most noticeable on older TVs and monitors, where these kinds of scenes that should appear as a continuous gradient of color from top to bottom appear as a series of obvious bands that get progressively lighter or darker.

It's unlikely that most iMac users really need this level of precision, said Rafał Mantiuk, a senior lecturer at the University of Cambridge who works on graphics and display technology.

"In my honest opinion, very few people will notice the difference," he told Live Science. "There will be a tiny proportion doing graphics work who will maybe appreciate it, but for 99 percent of people, it won't make a difference."

And the technology is not particularly new — Mantiuk said he has been working with 10-bit displays for about a decade, but they have largely been reserved for high-end specialist equipment.

In the last couple of years, however, 10-bit technology has appeared in some high-definition TVs, because it is a prerequisite for high dynamic range (HDR) video, the latest craze to hit the display market.

The new iMac's screen is 43 percent brighter than the previous version of the iMac, at 500 nits — the industry-standard measurement of display brightness — which Mantiuk said is more likely to noticeably change the experience of users by increasing contrast.

But 500 nits is still well behind the more than 1,000 nits that high-end HDR TVs are capable of, which may be why Apple has avoided using the phrase HDR in its marketing, Mantiuk said.

Unlike some displays that have 10-bit color built into the hardware of their panels, the new iMac screens will have 8-bit panels and will use a processing trick called dithering to present 1 billion colors to the user.

An Apple spokesperson said the new iMac will use an algorithm that employs both temporal and spatial dithering. The former takes advantage of the human eye's tendency to mix two colors in close proximity to create a blend of the two, while the latter achieves the same effect by having a pixel flash between two colors very rapidly.

This essentially tricks the eye into thinking it sees more colors than the display is capable of producing, Mantiuk said. The trick is already widely used by software like Photoshop and to get 8-bit output on 6-bit panels, he said, adding that the vast majority of users likely won't be able to distinguish the output from that of a true 10-bit display.

"The human eye is very unlikely to spot any difference," he said.

For the small number of pro users for whom it does matter, such as Mantiuk, the Apple spokesperson said it's possible to connect a third-party display to get an end-to-end 10-bit experience.