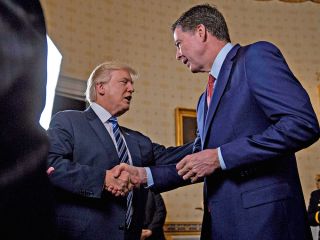 President Donald Trump greets James Comey, then director of the FBI, during a reception in the Blue Room of the White House on Jan. 22. Trump fired Comey on May 9.
(Image: © Andrew Harrer-Pool/Getty)

How could former FBI Director James Comey, a 6-foot-8 onetime prosecutor known to stand up to power — feel "stunned" and lapse into an "awkward" silence during a conversation with President Donald Trump?

That's how Comey described his silent response to Trump's demand for loyalty in a private conversation that the fired FBI chief illuminated during a U.S. Senate hearing yesterday (June 8).

Comey may tower over the president, but it turns out he succumbed to a human behavior that is not uncommon in which people temporarily freeze, especially when something shocking is said and there's an unequal power dynamic at play, said Samuel Wang, a professor of neuroscience at Princeton University. [5 Ways Your Emotions Influence Your World (and Vice Versa)]

"In such a situation, we don't have the tools to respond appropriately," Wang told Live Science. "And so, a fairly natural response is to pause. When you add to that the fact that the president of the United States is a powerful person, then the power dynamic makes it even more of a fear or shock response."

Wang noted that Comey likely froze because he's used to following procedure, and "for him to be with an authority figure who goes far outside the bounds of normal behavior and starts demanding loyalty and [seems to be] attempting to obstruct justice, this is just beyond shocking," Wang said.

Likewise, people in inferior positions might be stunned into silence, and might worry about offending a superior or saying something "wrong" following a socially unacceptable exchange, largely because of the repercussions that might follow, said David Altheide, a regents' professor emeritus of sociology at Arizona State University.

It's not uncommon for people to step beyond the range of socially acceptable behavior, whether it's between friends, a parent and a child or an employee and an employer, Altheide said. Moreover, these moments of unacceptable behavior tend to happen more frequently with minorities and women, Altheide told Live Science.

There are several ways Comey could have responded, and many women may be familiar with these.

"Women, in general, are extremely good at dealing with intimidation because they experience it a lot and so they are often more prepared to be intimidated, to be in awkward situations," Altheide said. "They develop a number of defense interaction styles."

For instance, people on the receiving end of intimidation might use humor to diffuse the situation, change the subject or, like Comey, wait a moment before answering, Altheide said. Other tactics that can buy time include repeating the question or going off on a tangent, such as by saying, "Boy, that reminds me of the time when…," Altheide said. Many people resort to nervous laughter, he added.

Sometimes people think of the perfect thing or zinger to say hours or even days after the conversation took place. In most cases, it's probably best to let it be, and instead learn from the experience, Altheide said.

"It doesn't make sense to drive back to the bar where you were two hours later and say, 'What I meant to say is…,'" Altheide said. Rather, you can review your newfound response and then think of tactics that will give you time to collect your thoughts the next time you're unsure of what to say.

However, if you think of something important that you left out of a key conversation, it might be worth your while to follow up. Let's say you flubbed an unexpected question during a job interview: "You could send an email, you could call them up," Altheide said. "You could say, 'I just want to make clear how I would handle that situation,' or 'I just want to make clear this point about my background and experience.'" [Understanding the 10 Most Destructive Human Behaviors]

Had Comey anticipated Trump's question, he could have said something along the lines of, "As I suggested before, what I meant and what I conveyed to you is X," Altheide said.

Rather, Comey's experience shows that people in all walks of life can encounter a situation that stuns them into silence. When asked today by Sen. Marco Rubio, R-Fla., why he didn't tell the president "that is not an appropriate request," or alert the White House counsel, Comey explained what his state of mind was like at the time.

"I don't know," Comey said at the hearing. "As I said earlier, I think the circumstances were such that it was — I was a bit stunned and didn't have the presence of mind."