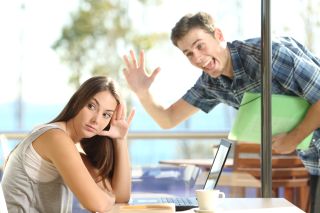 Imagine this: A man sends several notes to a woman, but she doesn't want them. How does the woman react? A new study finds that Japanese women may think that the notes are OK, but in England, the vast majority of women view the practice as unacceptable. In another scenario, a man waits outside a woman's office, even though she didn't ask him to do so. In the study, this is acceptable to the majority of the Egyptian women, but few of the women from Trinidad would agree.

The reasons for these discrepancies in women's reactions may come down to cultural differences, a new study from Australia finds.

In the study, researchers looked at how women around the world view certain "intrusive" male behaviors, which range from clearly harmful (for example, death threats) to those that are in more of a gray area (such as a man calling a woman after meeting her just once). [5 Misconceptions about Sexual Assault]

How young women think about these behaviors varies greatly among different countries, according to the study, published May 15 in the journal Aggressive Behavior.

The students were given questionnaires that asked them to indicate if they found 47 "intrusive" behaviors by men to be unacceptable.

The first category, aggression and surveillance, included what the researchers deemed to be the most serious actions, such as threats to harm or kill an individual or a loved one, and forced sexual contact. The behaviors in this first category were most likely to be deemed unacceptable by the women in the study. For example, on average, 97 percent of the women in all 12 countries said that forced sexual contact was unacceptable; followed by a man physically hurting someone a woman cares about (96 percent); making death threats (95 percent); threatening to hurt a woman physically (94 percent); and hurting a woman emotionally (94 percent).

But even in this category — which includes behaviors that the researchers called "clearly detrimental in nature" — there were differences among the countries. While 100 percent of the women surveyed from Egypt, Scotland and India said that forced sexual contact was unacceptable, only 84 percent of the Armenian women agreed with this assessment.

The second category, unwanted attention, included a man standing and waiting outside of a woman's home or workplace and refusing to accept the end of a relationship. In 8 of the 12 countries included, a majority of the women surveyed called these behaviors unacceptable, the researchers found.

Acceptability increased in the last two categories. One category, persistent courtship and impositions, included behaviors such as a man asking a woman at a social event if she wanted to have sex and "wolf-whistling" at a woman in the street. The other category, courtship and information seeking, included a man joining a new group to be closer to a woman and asking others about a woman. [6 Ways Sexual Harassment Damages Women's Health]

Indeed, the final category included the five male behaviors that were deemed unacceptable by the smallest percentage of women in all 12 countries, on average: asking a woman out as "just friends" (14 percent of all women in the study said this was unacceptable); talking about a woman to a mutual friend after just meeting her (15 percent); calling a woman after an initial meeting with her (16 percent); doing unrequested favors for a woman (16 percent); and a stranger engaging a woman in conversation in a public place (21 percent).

Still, there were differences in how women in different countries perceived these "less intrusive" behaviors: Just 2 percent of the Italian woman said that asking a woman out as just friends was unacceptable, compared with 42 percent of the Egyptian women, the study said.