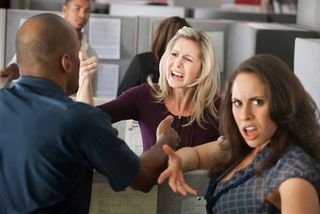 If you don't want to get into a throw-down at work over political views, you may want to start by keeping any name-calling to yourself, says one religion expert.
(Image: © Office politics via Shutterstock)

But civil conversations are possible, said Michelle Voss Roberts, an assistant professor of theology and culture at Wake Forest University.

Drawing upon rules established as foundations for productive discussions among people of different religions, as part of the interfaith movement, Voss Roberts offers five principles for having a productive discussion with your political opponents, pre- and post-election.

"Regardless of the outcome of the election, we do live in a society where the conversation continues," she said. "These principles can help us get through the election, and they are also going to be really important for moving forward together." [10 Historically Significant Political Protests]

1. Assume the best: "Especially in political dialogue, we can demonize the other side," Voss Roberts said. "You want to be taken seriously as someone who is earnest and sincere so you assume the other person is also speaking honestly and sincerely."

2. Allow others to define themselves: Or, in other words, don’' call your opponent names. "If you are trying to relate to someone on a human level, if you want to hear what your Republican or Democrat neighbor really thinks about health care or the economy, name-calling tends to cut off that dialogue."

4. Develop a capacity for self-criticism: In religion and in politics, no one has an untainted history, and participants in a dialogue need to acknowledge this, Voss Roberts said. This plays out in discussions over the economy, in which each side points fingers at the other, but neither acknowledges that their own policies may have contributed to, or failed to address, the problems. "I think because we are encouraged to polarize,we are not even able to have that conversation. Instead, we just fling accusations back and forth," she said.

5. Be aware of power: Be aware of whose voices are heard, and whose aren't. A victory may make those on that side feel they have a mandate, however, as members of a pluralistic society, Americans have a responsibility to keep in mind marginalized individuals, she said.

In order for a discussion to be successful, neither participant can seek to convert the other, but rather to understand the other person and the differences. However, this intent puts an open discussion at odds with an important goal of political rhetoric in our society: converting others to a particular viewpoint.

But the political realm could learn from the religious one. Interfaith discussions opened dialogue after events like the Holocaust and the 9/11 terrorist attacks, she said.

"We have to live as citizens together, regardless of who wins the election tomorrow; that sort of relationship-building will benefit us in the long run," Voss Roberts said.