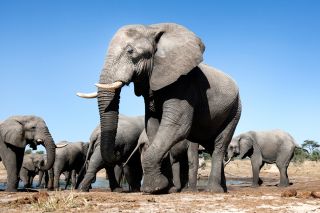 A professional big-game hunter died near Gwai, Zimbabwe, on the afternoon of May 19, after he was crushed by a female elephant that had been shot by a member of his hunting party.

Theunis Botha, a resident of Tzaneen, South Africa, was leading a group of hunters when they surprised a breeding herd of elephants and were charged by three females, according to the South African news site News24.

As Botha fired at the charging elephants, a fourth female grabbed him, lifting him into the air with her trunk. One of the other hunters in their party shot the elephant, which fell on Botha as she died, News24 reported. [7 Iconic Animals Humans Are Driving to Extinction]

The incident took place at the Good Luck Ranch near Hwange National Park in northwest Zimbabwe, Simukai Nyasha, a spokesperson for the Zimbabwe Parks and Wildlife Management Authority, said in a statement.

Botha was well-known for safaris using dogs that were specially bred and trained to track and hunt animals such as leopards and lions, according to his website, Big Game Safaris. He began leading hunting expeditions in 1989 on his own property in South Africa, later offering his services for hunts on private ranches in Zimbabwe, Botswana, Mozambique and Namibia, Big Game Safaris reported in a biography of its founder.

Though wildlife trophy hunters typically confront large animals from a distance and with long-range rifles, that does not always protect them from being attacked by their prey. In 2013, a suspected poacher in Charara National Park, also in northwestern Zimbabwe, met a similar fate to Botha's when he was trampled by an elephant. His remains were found by rangers; two other poachers who entered the park with the man to illegally shoot elephants were arrested by authorities.

Zimbabwe is home to an estimated 80,000 elephants, the second largest population of elephants in Africa, officials reported in the Zimbabwe National Elephant Management Plan (2015 – 2020).