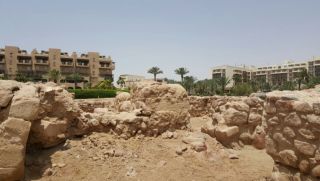 The ancient stone walls of Ayla in modern-day Aqaba.
(Image: © Courtesy of JREDS)

This July, archaeologists in Jordan will begin an underwater search for remains of an early Islamic city.

Located at the northern tip of the Red Sea, modern-day Aqaba is Jordan's only port. In the Middle Ages, the city was known as Ayla. Archaeologists uncovered the ruins of Ayla only in the last 30 years, and now, they want to know if there's more to be found off the coast.

"We are going to perform an archaeological survey underwater to explore any architectural extensions of the city of Ayla," said Sawsan Fakhry, an archaeology expert for Jordan's Royal Marine Conservation Society (JREDS). "There may be a good chance to find the remains of the port mentioned in geographical and historical sources." [See Photos of Another Underwater 'Lost City' Off Zakynthos, Greece]

The coastal town was both an oasis and an important stop on trade routes connecting Egypt, the Levant (an area encompassing modern-day Israel, Palestine, Lebanon, Jordan and Syria) and even China.

Ayla was established as an Islamic city around the year 650, next to an older port built by Nabataeans (a civilization probably most famous for building Petra) that had been used in the Roman and Byzantine periods, according to an account by Donald Whitcomb, an archaeologist at the University of Chicago. Arab geographers of the ninth and 10th centuries mention the city as a prosperous place full of merchants. The site also saw an influx of visitors during the annual pilgrimage to Mecca.

But after suffering earthquakes and attacks from Crusaders, Ayla was abandoned by 1116, and its ruins were eventually buried beneath the sand.

The first archaeological excavations began in the 1980s, led by Whitcomb and Jordan's Department of Antiquities. These efforts revealed the stone walls, gates and towers that were part of the Islamic city's original, rectangular plan.

Besides architectural structures like berths for ports, the underwater team might find artifacts such as anchors and broken pieces of pottery that would indicate the origin of international trade shipments to the area, Fakhry said.

The search is part of a wider effort to conserve the underwater cultural and environmental resources off Jordan's small coastline. Besides the potential archaeological remains, there is also a coral reef site that JREDS is trying to get protected, Ehab Eid, executive director of JREDS, told Live Science. Eid added that the project was inspired by the success of Aqaba’s successful Cedar Pride Shipwreck project, in which a Lebanese freighter that was damaged by a fire in the 1980s was deliberately sunk to become an artificial reef.