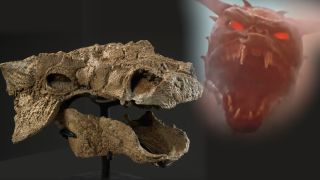 What's as long as a pickup truck, as heavy as a white rhinoceros and as weird-looking as Zuul, the monster from the 1984 "Ghostbusters" movie? A newfound species of ankylosaurus.

In a new study, researchers describe the 75-million-year-old dinosaur that lived during the Cretaceous  and sported bony armor and spikes.

Due to its uncanny resemblance to Zuul, paleontologists are calling it Zuul crurivastator (CRUR-uh-vass-TATE-or). The genus name is a nod to Zuul, the fictional Gatekeeper of Gozer in "Ghostbusters." The species name translates to "destroyer of shins" in Latin, a name inspired by the club at the end of the dinosaur's tail. [See images of Zuul crurivastator, the 75-million-year-old ankylosaurus]

But despite the formation's fame among fossil hunters, the discovery of Z. crurivastator took the researchers by surprise. For starters, it is the first ankylosaur from the formation that has received a scientific name, they said. It's also one of the most complete dinosaur skeletons from this formation.

"Remarkably, [it] is the first ankylosaurin skeleton known with a complete skull and tail club, and it is the most complete ankylosaurid ever found in North America," the researchers wrote in the study.

Z. crurivastator may have looked intimidating, as if it would devour another dinosaur, but it was actually a plant eater, the researchers said. Rather, it likely used the club at the end of its 10-foot-long (3 meters) tail to hit the legs of predators, they added. Moreover, it may have used its powerful tail to battle rival males for mates or territory, the researchers said.

Zuul also sported several rows of large, sharp, bony spikes along its 20-foot-long (6 m) body, the researchers said. It weighed about 5,500 lbs. (2,500 kilograms), about as much as a modern white rhinoceros.

"I’ve been working on ankylosaurs for years, and the spikes running all the way down Zuul’s tail were a fantastic surprise to me — like nothing I’ve ever seen in a North American ankylosaur," the study's lead researcher, Victoria Arbour, a postdoctoral fellow of paleontology at the Royal Ontario Museum and University of Toronto, said in a statement.

The finding shows that ankylosaurus dinosaurs were evolving rapidly during the late Cretaceous period in North America, the researchers added.

The preservation of Zuul is "truly remarkable," the study's senior researcher, David Evans, the curator of vertebrate palaeontology at the Royal Ontario Museum, said in the statement.

The study will be published today (May 10) in the journal Royal Society Open Science.