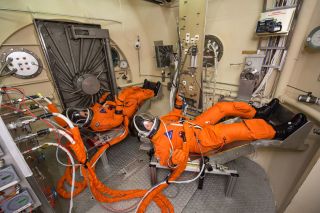 A test at NASA's Johnson Space Center in Houston of the spacesuit astronauts will wear in the agency's Orion spacecraft on trips to deep space.
(Image: © Bill Stafford/NASA)

NASA has a spacesuit problem.

A NASA study assessing whether it can add a crew earlier than planned aboard its new Orion deep-space capsule, which would be lofted during the debut flight of the heavy-lift Space Launch System (SLS) rocket, is still pending, but the astronauts' attire could end up being a showstopper.

The OCSS is one of three spacesuits NASA has worked on to replace shuttle-era equipment still in use aboard the International Space Station. The Inspector General's audit found that despite spending nearly $200 million over the past 10 years, NASA is at risk of running out of time to test any of the new spacesuits aboard the station before its planned retirement in 2024.

At the behest of the White House, in February NASA undertook a study to consider adding crew to an earlier mission, known as Exploration Mission-1 or EM-1, which is currently an unmanned mission around the moon scheduled to launch at the end of 2018.

NASA has not yet revealed whether adding crew to the mission is feasible, but all astronauts flying on Orion will be required to wear an OCSS. The spacesuit, which is to be worn during launch and landing, is designed to protect astronauts from fire, smoke, and toxic chemicals. It would also provide a redundant pressurized atmosphere in case of a problem with the capsule.

A preliminary design review of the Orion spacesuit, which is being developed in-house by NASA engineers, is slated for June, with a final review targeted for next summer. NASA spent about $12 million between 2010 and 2016 on the project, NASA Inspector General Paul Martin wrote in a report released on Wednesday.

In addition to OCSS, NASA has worked on two pressurized spacesuits that astronauts can wear during spacewalks, referred to as extravehicular activity (EVA) in NASA parlance. The first is the Constellation Space Suit System, which originally was developed as part of the Bush-era, moon-bound Constellation exploration program that was canceled in 2010.

"Rather than terminate the contract, NASA paid the contractor $80.8 million between 2011 and 2016 for spacesuit technology development, despite parallel development activities being conducted within NASA's Advanced Exploration Systems Division," Martin wrote.

The audit found that NASA has spent $135.6 million on the Constellation spacesuit and another $51.6 million on a follow-on program known as the Advanced Space Suit Project.

"Despite this investment, the agency remains years away from having a flight-ready spacesuit" that could replace the current equipment, the report said.

RELATED: Hibernation for Deep-Space Exploration Could Happen Sooner Than You Imagined

The spacesuits are effectively miniature, one-person spaceships that keep an astronaut alive in the vacuum and temperature extremes of space, while having enough flexibility and durability so that spacewalking crew can fix equipment, dig, and perform other mission-critical activities. The agency's efforts have been complicated because it does not yet have a firm plan in place for where spacewalking astronauts will be needed and when they would arrive.

NASA's next-generation spacewalk suit is being developed in three stages. The first iteration is designed for use on the space station; the second for missions around the moon, a region known as cislunar; and the third for use on Mars.

"Without specific mission criteria, engineers must make assumptions about system requirements for future missions," the report noted. "For example, spacesuit requirements vary for EVAs in cislunar space, on Mars, or on the Martian moon Phobos, as each destination has different temperatures, radiation levels, pressures, mobility requirements, and exposure to dust and debris."

The Inspector General urged NASA to develop and implement a formal plan for designing, producing, and testing next-generation spacesuits, and called for it to conduct a study to determine if maintaining the current EVA spacesuit is less expensive than developing and testing a new one.

In a written response to Martin, NASA called the audit a "fair assessment," though the agency took issue with the contention that it should have canceled the Oceaneering contract.

NASA associate administrator William Gerstenmaier said that he accepts the auditor's recommendations. He pledged to issue a report about improving the agency's spacesuit development initiatives by September 30.