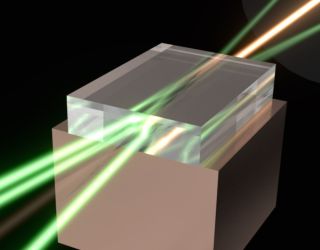 The "super" laser brings together the power of multiple laser beams directed into a single intense output using an ultra-pure diamond crystal at the point of convergence.
(Image: © Macquarie University)

Though it's not big enough or strong enough to destroy a planet, scientists have developed an amplified laser reminiscent of the Death Star from "Star Wars," according to a new study.

The futuristic superweapon combines multiple laser beams into one destructive blast, the researchers said. The idea of merging laser beams is not new, nor has it been limited to science fiction before now. A decades-old Russian missile defense project looked to use liquid as a beam combiner, but that project was abandoned after it was deemed not practical. A similar project in the U.S. investigated laser fusion, but using different materials. Now, a team of Australian scientists has combined the principles of these two research projects and applied them to a new material: diamond.

An ultrapure diamond crystal is the key to a new proof-of-concept amplified laser. By placing a diamond at the point of convergence of the different laser beams, the power of each individual beam is transferred into one potent laser beam, the researchers said. This power transfer occurs due to Raman scattering — when particles are dispersed and excited to higher energy levels — which is especially strong in diamond, according to the scientists. [Science Fact or Fiction? The Plausibility of 10 Sci-Fi Concepts]

Diamonds also have high thermal properties that allow them to harness the laser beams' energies without overheating — a concern with other materials that could be used to combine the laser beams.

"The fundamental problem is that the laser materials struggle to dissipate the very large waste heat load," study co-author Rich Mildren, an associate professor of physics at Macquarie University in Sydney, Australia, told Live Science. "There are technologies on the verge of having enough power, but heat build-up causes the beam to flare and power to drop leading to a lack of power on target."

Researching amplified-laser concepts has become increasingly important as new security threats have arisen, Mildren said. From low-cost drones to missile technology, militaries around the world are looking to high-power lasers as a possible defense solution.

Initial tests of the diamond laser have shown success in short bursts, and the researchers said they are continuing to test the laser for longer periods and at higher powers. When fully operational, the amplified laser could disable drones, missiles and other small objects, according to Mildren.

The proof-of-concept laser was described in a study published online March 30 in the journal Laser and Photonics Reviews.