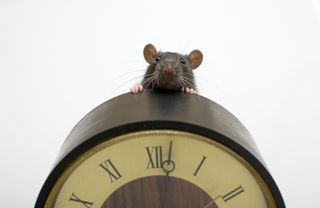 The biological clock is located deep in the brain, but it may be possible to reset it by targeting certain cells in a person's eyes, a new study finds.

The new findings may lead to the development of eye drops that could be used to help people adjust to jet lag someday, the researchers wrote in the study, published today (April 17) in The Journal of Physiology.

However, the study was done in lab rats, and much more research is needed to confirm that the findings also apply to humans. [10 Things You Didn't Know About the Brain]

Scientists know that an area of the brain called the suprachiasmatic nucleus (SCN) controls a person's biological clock, according to the study. One way the SCN controls the body's clock is by releasing signaling molecules that travel throughout the body, including one called vasopressin, the researchers said.

But the SCN doesn't simply "know" what biological time it is. Rather, it gets its information from cells in the eyes that respond differently to light of different intensities. Bright light in the morning, for example, helps synchronize a person's biological clock, while bright light at night can throw the clock out of whack. When people travel across time zones, they are exposed to bright light at different times of day than what the body expects, resulting in jet lag.

However, it wasn't entirely understood how these cells in the eyes communicate with the biological clock in the brain.

In the new study, the researchers found that in rats, the eyes' retinal ganglion cells also produce the signaling molecule called vasopressin, and that this signaling molecule travels from the eyes to the brain to help regulate the biological clock.

In one experiment, for example, the researchers showed that a bright pulse of light excited the retinal ganglion cells in the rat eye, causing them to release vasopressin. In another experiment, they showed that after a pulse of light, the neurons in the brain's suprachiasmatic nucleus were also activated. But when the researchers injected a compound into brain cells that blocked vasopressin, they found that the brain cells responded less to the same pulse of light. [6 Foods That Are Good For Your Brain]

The findings suggest that vasopressin from the cells in the eye play a role in regulating the biological clock, the researchers wrote.

This could lead to the development of drugs that could also adjust the biological clock, senior study author Mike Ludwig, a professor of neurophysiology at the University of Edinburgh in Scotland, said in a statement.

If researchers can figure out a way to alter the levels of vasopressin that come from the eye, they could potentially develop eye drops that could help people recover from jet lag, Ludwig said.