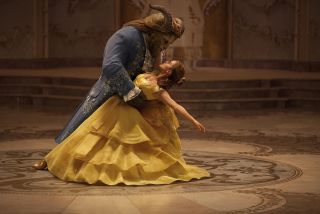 Beauty (Emma Watson) and Beast (Dan Stevens) overcome their differences to find true love in the 2017 film "Beauty and the Beast."
(Image: © Disney )

The recent live-action movie "Beauty and the Beast" (Disney, 2017) is the latest retelling of the "tale as old as time" — a tender and life-changing romance between a human and a nonhuman animal that is ultimately made human by love — which has captivated audiences of all ages for hundreds of years.

Variants of Beast's and Beauty's story, in which an innocent, beautiful girl is imprisoned and enthralled by a fierce and possibly dangerous monster, have been shared for centuries. And there are many more tales from around the world that describe unlikely couples who come together and grow to care for each other, even when one of them — either the groom or bride — isn't quite human.

What explains the enduring attraction of these myths and stories, and what might our affection for these bizarre pairings tell us about ourselves? [5 Real-Life Examples of Fairy Tales Coming True]

"Beauty and the Beast" — as most Westerners recognize it today — was a version of the folktale written in 1756 by French author Jeanne-Marie Leprince de Beaumont. Her child-friendly interpretation reflected a widespread literary trend that adapted fairy tales with adult themes for younger audiences, wrote Harvard University's Maria Tatar in the introduction to "Beauty and the Beast: Classic Tales About Animal Brides and Grooms from Around the World" (Penguin Classics, 2017).

Stories in the book represent oral traditions from a range of locales, including India, Ghana, South Africa, Greece, Ireland, Japan and the West Indies. In the tales, humans couple with a variety of beasts — there are monkey grooms, and tortoise brides; princes bewitched by frogs; and princesses who marry snakes. In fact, Tatar collected these diverse stories to show that there really isn't a single point of origin for the timeless legend of Beauty and the Beast, said Tatar, who is a John L. Loeb Professor of Folklore & Mythology and Germanic Languages & Literatures at Harvard.

"Just think about the glorious puzzle of why these stories can be found the world over —even in cases where you can't trace them in trade routes or literary transmission," Tatar told Live Science. "This story has something so primal at its core that I think we have to keep refashioning it and retelling it," she said.

Central to nearly all of these tales is a theme of love's transformative power, and the redemptive qualities of empathy and compassion, turning the beast-like partner into a kindred spirit, Tatar said.

In "Beauty and the Beast," Beauty is Beast's prisoner, intimidated but not cowed by his brutish and violent ways. Along the way, she teaches him compassion, and by learning to love, he breaks the evil spell and reverts to his true form — a handsome prince.

A similar story was told in Norway, in "East of the Sun and West of the Moon." A young girl is spirited away by a beast, who was cursed to live by day as a bear and by night as a man, until he experienced true love. The couple endures betrayal and many trials, and after a long separation they are happily reunited — both in human form.

Folktales such as these were originally meant for an adult audience, so the storyteller was free to embellish with details that could be bawdy or gruesome — and the juicier the better, as the tales were often meant to keep people engaged and awake during tedious chores, Tatar explained.

In the Italian tale "King Pig," a talking pig marries three sisters, one after the other — he "defiles" the wedding bed with his filthy body and kills the first two girls with his sharp hooves after they spurn his advances. But the third sister welcomes the amorous attentions of the foul and dirty pig, and "was not at all backward in returning his caresses," according to the story. After several days, he casts off his pig skin, revealing himself to be a handsome prince in disguise. [The Truths Behind 10 Old Wives Tales]

Stories about animal brides and grooms may have helped fearful young girls to explore the "beastly" nature of sex, with the added reassurance that in the end everything is likely to turn out all right, Tatar added.

"The idea of companionship in marriage and love at first sight is fairly new," Tatar told Live Science. "Stories at a certain point were really told to help young women to accustom themselves to marrying someone who looked monstrous. To a 14-year-old —and girls often did marry at that age — any full-grown man looks like a big, hairy beast," she said.

Most of the overtly ribald or grotesque elements in fairy tales were usually sanitized as the stories transitioned into the nursery and became part of the culture of childhood, which became common during the 18th century in Europe, Tatar said.

However, even the cleaned-up versions retained their power — particularly "Beauty and the Beast," which found new life during the 20th and 21st centuries as an art movie, a television series, an animated movie, a stage musical and a live-action movie that recently grossed over $1 billion at the box office worldwide, Variety reported.

"We all recognize the way that love not only transforms the other, but it also transforms us, it changes us," Tatar told Live Science. "On another level, this is a story about how we relate to the other. Do we run away? Do we react with anger and hatred, or are we courageous and empathetic?"

"It's a story that can be taken in so many different directions," Tatar said. "It touches on a host of hot-button issues that are relevant to every time and place — and to every generation as well."

Buy "Beauty and the Beast: Classic Tales About Animal Brides and Grooms from Around the World," on Amazon.