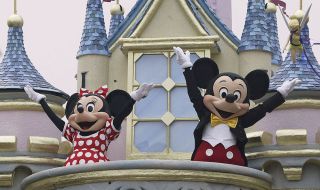 The signature characters who wander around Disney theme parks taking photos with kids and signing autographs may be played by huggable humanoid robots in the future.

Disney Enterprises filed a U.S. patent application for a "soft body robot for physical interaction with humans" that would act like an animated character, reported the Orlando Sentinel last week (April 7). The patent describes a rigid robot with pliable chambers filled with fluid or air. Designed to reduce collision impacts with humans, these chambers could sense pressure and adjust its inflation appropriately.

Sketches of a prototype, and the robot's description, parallel the design of Baymax, a soft-bodied robot from Disney's 2014 film "Big Hero 6," according to the Orlando Sentinel. Specific characters were not named in the application, however. [10 Crazy New Skills That Robots Picked Up in 2016]

"It's hard to know why Disney decides to file for a patent, but they have been looking at soft-body robots since 'Big Hero,'" theme park writer Jim Hill told the Sentinel. "Disney is still terrified that even with this soft technology, a robot could accidentally harm a child. They do a lot of testing."

Though robots are already used throughout Disney's parks — including some free-roaming characters like Push the Talking Trash Can and Lucky the Dinosaur — the patent filing notes that it is difficult to ensure complete safety in human-robot interactions, the Orlando Sentinel reported.

Disney inventors have already tested two prototypes, according to the patent application. In these tests, "the robot was robust to playful, physical interaction," which likely means that tests were successful in inflating the robot for safe contact.

Disney officials did not offer comment on the application, according to the Orlando Sentinel.