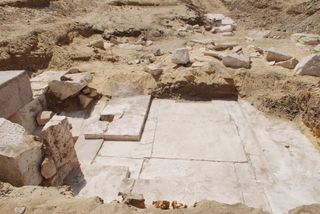 A 3,800-year-old pyramid found with an alabaster block bearing the name of pharaoh Ameny Qemau has been discovered at the site of Dahshur in Egypt.

Another pyramid containing artifacts bearing the name of Ameny Qemau (also spelled Qemaw) was discovered in 1957 in Dahshur, a royal necropolis in the desert on the Nile River's west bank. The finding has left Egyptologists with a mystery as to why the same pharaoh seemingly has two pyramids to his name.

The remains of the pyramid's inner structure were discovered by a team of Egyptian archaeologists and announced today (April 4) by the Egyptian Ministry of Antiquities.

"The uncovered remains of the pyramid represents a part of its inner structure, which is composed of a corridor leading to the inner side of the pyramid and a hall, which leads to a southern ramp and a room to the western end," Adel Okasha, the director general of the Dahshur necropolis, said in a statement from the ministry. [In Photos: See Another Egyptian Pyramid That Predates Giza]

Within the inner structure, the team discovered an alabaster block containing 10 lines of hieroglyphic writing. The ministry said it had not yet deciphered the writing on the block.

Live Science showed pictures of the pyramid's block, released by the ministry, to several Egyptologists. Both James Allen, a professor of Egyptology at Brown University, and Aidan Dodson, a research fellow at the University of Bristol, said  that inscribed on the block is a type of religious text used to line the walls of pyramids, and that it bears the name of the pharaoh Ameny Qemau.

Thomas Schneider, a professor of Egyptology and Near Eastern studies at the University of British Columbia, also agreed that the name of the pharaoh on the hieroglyphic inscription is Ameny Qemau. "The resolution of the photo is not very good; however, I believe I can read the name of Ameny Qemau," he said.

Dodson, who co-authored a 1998 paper on the artifacts from the Qemau pyramid discovered in 1957, noted the peculiarity of two pyramids holding the pharaoh's name.

Why both pyramids would have artifacts bearing the name of the same pharaoh is a mystery, Dodson said. Perhaps, the newly found pyramid doesn't actually belong to Ameny Qemau, but rather to one of his predecessors, he said. Along that line of thinking, perhaps upon rising to power, Qemau chiseled out the name of his predecessor on the block and inserted his own name instead, Dodson said. The hieroglyphic symbols representing the name of Ameny Qemau are of poor quality, indicating that the carver had to inscribe them over a chiseled-out area, Dodson added.

"Why Ameny Qemau would have added his name is unclear, as Ameny Qemau's actual pyramid was found in 1957," Dodson said.

The antiquities ministry said in a statement that excavations of the pyramid are not yet complete and that "further excavation is to take place to reveal more parts."