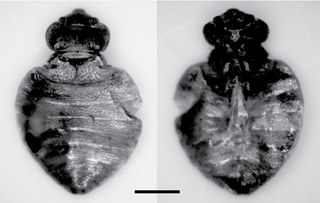 Researchers investigating a cave in southern Oregon have found the oldest relatives of the common bedbug, suggesting that some 11,000 years ago humans may have been in contact with the parasites.

The fossilized remains, which belong to the cimicid family (a group that includes today's common bedbugs), were found during archaeological investigations of the Paisley Five Mile Point Cave site, researchers said in a new study detailing the findings. In particular, Cave 2, of the eight rock shelters on the site, has yielded thousands of insect remains as well as some the oldest preserved evidence of human activity in North America.

"In total, I recovered the remains of 14 individual cimicids, but they were not the bedbug we all know and love from hotel rooms," said study researcher Martin Adams, a zooarchaeologist who founded the consultancy Paleoinsect Research. [Up Close & Personal: See Cool Images of Bedbugs]

Today, there are three species of bedbug that have adapted to a lifestyle of living off humans: Cimex lectularius, the common and cosmopolitan bedbug; Cimex hemipterus, with a worldwide distribution, but much more tropical; and Leptocimex boueti, an African species.

Of the 14 individuals recovered in Oregon, five were identified as C. pilosellus, three as C. latipennis, and one as C. antennatus, Adams and co-author Dennis Jenkins, of the Museum of Natural and Cultural History at the University of Oregon, wrote in the Journal of Medical Entomology. An additional five were identified as belonging to the genus Cimex, but were too fragmented for their species to be identified.

Three of the 14 were of indeterminate gender; the other 11 were all female. The C. antennatus specimen is approximately 5,100 years old, while the others range in age from 9,400 to nearly 11,000 years old. [Bedbugs: The Life of a Mini-Monster (Infographic)]

"All three species, and presumably the unidentified ones as well, are native species, and all are parasites of bats, which were also present in Cave 2," Adams told Live Science.

If the opportunity arose…

However, cimicids may not be as rigid in their host preferences as had been assumed, Adams said. "I believe the bat-parasitic cimicids would have fed on humans if the opportunity presented itself," he said.

Adams suspects that opportunity indeed occurred at Paisley Cave, which was occupied seasonally by hunter-gatherers. He described a scenario in which a bug latching onto a bat just fell to the floor of the cave as the bat flew off.

"Since the bugs themselves don't fly, they would soon have to feed on whatever is closest, and that would've been the humans living there," Adams said.

Not surprisingly, both C. lectularius and C. hemipterus became human parasites thousands of years ago in Old World caves, when people shared caves with bats, other research has shown.

"When humans left the cave environment, the bugs went with them and adapted to become the cosmopolitan human pests with which we now are familiar," Adams said.

But while there seems to have been a similar scenario at Paisley Caves, those local species didn't follow humans out of the cave environment.

"Why not? Were the cimicid populations too small to establish themselves outside the caves or were the host populations too small?" Adam said. "Given that Paisley Caves was only a seasonal-occupation area for human hunter-gatherers, did the humans move around too much, or were the bugs not able to withstand the environment outside the caves for very long? Or were there other constraints involved?" he asked.

Even if no intersection between man and bug occurred, the finding is important because it provides the earliest record of the genus Cimex, the researchers said.

Previously, the oldest remains of cimicids dated back to 3,550 years ago. Found at Tell el-Amarna in Egypt in 1999, they belonged to C. lectularius, thus representing the oldest known association between humans and bedbugs.

"Our findings help to underscore that there are more cimicids out there and that we know little about them," Adams said.

"While I won't deny that human[-parasitizing] bedbugs can be intolerable and that it is important for us to be able to control them, the Paisley Caves research can help shine the light on some of the other cimicids and their non-human hosts," he added.