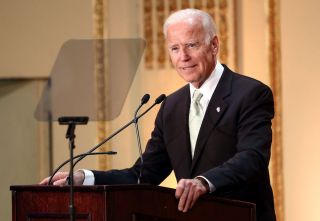 In fact, that was the case even while Biden was in office; when he would discuss topics such as national security and terrorism with world leaders, they'd often start the conversation by asking him if they could talk about cancer. "I'm being deadly earnest," Biden said here today (April 3) at the American Association for Cancer Research's annual meeting.

This interest comes, in part, from Biden's commitment to an initiative called Cancer Moonshot, a program focused on accelerating the pace of cancer research in the United States, with the goals of making more treatments available to patients and improving techniques for preventing and detecting cancer. In his address today, Biden talked about the progress that doctors and scientists are making toward this initiative and the steps that are still ahead. [Top 10 Cancer-Fighting Foods]

The Cancer Moonshot initiative was first announced in President Barack Obama's final State of the Union address, in January 2016.

Obama then appointed Biden as the "head of mission control" on the initiative. In December 2016, when Congress passed the 21st Century Cures Act, Sen. Mitch McConnell asked that the money dedicated to cancer research be named for Biden's son Beau, who died from brain cancer in 2015. The proposal passed with unanimous support. The legislation, which is aimed at boosting medical research, included nearly $2 billion for cancer research.

"Cancer never gives up, it never surrenders, and that's why we have to use every discipline" to fight it, Biden said. The good news, he added, is that "we're starting to do that."

In the past year, people have identified new approaches to data sharing, clinical trials, access to care and prevention programs, Biden said. He highlighted the importance of collaborating and sharing data: In one example, IBM's supercomputer Watson teamed up with the Department of Veterans Affairs and the Department of Defense. Together, they created a system that would allow a veteran with cancer to have his or her tumor genetically analyzed, and then have Watson run a search for all of the known specific therapies that target that particular cancer.

In addition, in June 2016, the University of Chicago launched the National Cancer Institute's Genomic Data Commons, which brings together cancer sequencing data and patient information, Biden said. In this case, Amazon agreed to make cloud computing available to store this massive amount of data for free, and the data can be accessed by any researcher in the world, he said. The data has been accessed 80 million times since June, and the accessibility exponentially increases the chances that researchers will be able to find some additional answers about the mysteries of cancer, Biden said.

It's also easier now than it was a year ago for patients to learn about clinical trials, Biden said. Only 4 percent of cancer patients ever join a clinical trial, but these trials are essential to advancing research and, in some cases, may be the only hope for a patient, he said.

But Biden noted that there is a new hurdle in the fight against cancer: the budget cuts proposed by President Donald Trump. These "draconian cuts" include proposals to slash funding for the National Institutes of Health (NIH) by $5.9 billion, he said.

This cut alone would set the NIH back 15 years, Biden said, and the chances of getting a grant for research would "almost certainly" reach a historic low. Moreover, a decrease in grants could lead labs to close, careers to end and cancer breakthroughs to be delayed, he added.

"This is no time to undercut progress," Biden said. "It's time to double down. It's time we be sure we deliver on the promise of science and technology to extend and improve lives."