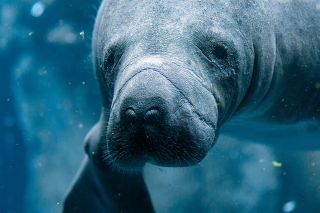 Dire environmental reports are seemingly everywhere, but today, there's a bit of good news: The roly-poly West Indian manatee (Trichechus manatus) is doing so well that the species is no longer considered endangered.

Significant increases in manatee population numbers and noted improvements to the animals' habitats convinced the U.S. Fish and Wildlife Service (FWS) to downgrade manatees' status from endangered to threatened, as defined by the Endangered Species Act (ESA), FWS representatives announced online today (March 31) in a statement.

Florida manatees were listed as endangered in 1967 under the Endangered Species Preservation Act of 1966, and officials added the Antillean manatee to the listing in 1970, the ruling reported.

While the manatees' revised status represents improvement in their prospects, a threatened species is still considered to be at risk, as it is "likely to become endangered within the foreseeable future throughout all or a significant portion of its range," according to the Endangered Species Act.

Minimizing manatee interactions with boats, which are frequently lethal to the animals, will be a priority for FWS in collaboration with the U.S. Coast Guard and with coastal communities in Florida, the representatives added. Additional initiatives will regulate water pollution and the use of fishing gear in manatee habitats, and monitor the manatees' access to warm natural springs, which could help the animals survive winter cold snaps, FWS representatives said.

The FWS estimated that about 6,300 Antillean manatees live in the wild, in an area ranging from the Mexican Gulf Coast to northern Brazil and the Caribbean, while an estimated 6,620 T. manatus latirostris individuals call Florida home.

"Today, we both recognize the significant progress we have made in conserving manatee populations while reaffirming our commitment to continuing this species' recovery and success throughout its range," Jim Kurth, acting director of the FWS, said in the statement.