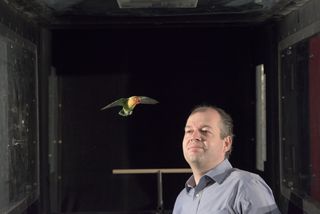 David Lentink of Stanford University stands next to a bird inside the test section of the wind tunnel.
(Image: © Linda Cicero)

A specially designed wind tunnel for birds could help scientists learn the secrets of avian aerial abilities and translate them into drones that are masters of flying through rough-and-tumble conditions.

"We thought, why not look at animals that have no problem doing this," Lentink told Live Science. "If we can figure out which principles they are using, we should be able to turn those principles into engineering design rules that we can apply in our robots. That's our goal." [Biomimicry: 7 Clever Technologies Inspired by Nature]

Solving the issue of flying in high turbulence will be crucial before the much-talked-about drone deliveries can go ahead in cities, Lentink said.

Designing and constructing the facility has taken Lentink more than five years. Trained as both a biologist and an engineer, his lab investigates animal flight and uses its findings to create advanced flying robots.

The wind tunnel is unique as it can recreate both the smooth airflows that occur high in the sky and the turbulent ones typical of forests and urban  canyons, where tall buildings channel air through narrow streets. It can also generate  gusts of wind.

The walls surrounding the test section of the wind tunnel, where the bird or drone is flying, can also be removed. In that way, the researchers can use

high-speed stereo fluoroscopy, a type of X-ray video, to image the movements of the bird’s skeleton at 1,000 frames per second within the wind "tunnel," or airflow. This is the first high-quality wind tunnel for animals to enable such high-speed video, Lentink said. He added that the technology will allow them to map how birds' joints move as they are buffeted by turbulence.

The facility is described in a paper published in the journal Royal Society Open Science yesterday (March 29) that includes its performance on key metrics like turbulence and acoustic properties. Lentink says sharing these details is vital so that experiments done in different animal wind tunnels can be more easily compared.

Lentink said he didn't want to duplicate the efforts of these facilities, but to complement them. This facility, rather than aiming to simply understand animal flight, was designed to also help engineers use this knowledge to craft more efficient flying robots.

"An engineer asks very different biological questions than a biologist," he said. "We always have an application in mind."

Dario Floreano, a professor at the Swiss Federal Institute of Technology in Lausanne who works on aerial robots, said the ability to switch between calm and turbulent airflow could be extremely useful for drone designers.

The wind tunnel "could be very useful for improving drone autopilot software and also for helping the design of new drones partly made of soft, sensorized and compliant materials that could match birds' amazing flight capabilities in a large variety of air conditions," said Floreano, who was not involved in the current study.

"They're not robots," he said.