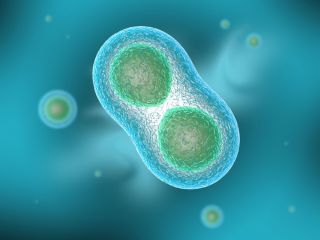 Cancer is caused by mistakes in DNA, and a new study finds that in most cancer cases, these mistakes are completely random; they're not due to heredity or environmental factors, but rather the result of random errors.

The mistakes, or mutations, cause cancer to happen because even a tiny error in DNA can make cells multiply out of control, the study said. Scientists had thought these mutations resulted mainly from two things: Either the mutation was inherited, or it was caused by outside factors that can damage DNA, such as cigarette smoke or ultraviolet radiation, the researchers wrote.

But a third cause — random mistakes — actually accounts for two-thirds of these mutations, said the new study, published today (March 23) in the journal Science.

When a cell divides, it copies its DNA, so that each of the new cells will have its own version of the genetic material. But each time this copying happens, it creates an opportunity for a mistake to occur. And in some cases, these mistakes can lead to cancer. [10 Do's and Don'ts to Reduce Your Risk of Cancer]

This means that cancer "will occur no matter how perfect the environment," senior study author Dr. Bert Vogelstein, a pathologist at the Sidney Kimmel Comprehensive Cancer Center at Johns Hopkins University, said in a statement.

In the new study, the researchers wanted to calculate what percentage of cancers were due to heredity, the environment and random mistakes. The scientists developed a mathematical model that incorporated data from registries of cancer patients around the world and data from DNA sequencing.

Some types of cancer, such as brain and prostate cancer, are nearly entirely attributable to random mistakes, the study said. The researchers found that random mistakes had caused more than 95 percent of these cancer cases that were looked at in the study.

A single mutation in a cell is unlikely to cause cancer, Vogelstein noted, speaking in a podcast produced by Johns Hopkins. Rather, the more mutations there are, the more likely it is that the cell will turn cancerous, he said.

Thus, mutations from random mistakes are enough to cause cancer by themselves in some cases, Vogelstein said. But in others, a combination of random mistakes, plus mistakes due to environmental factors eventually turns the cell cancerous, he said. For example, skin cells have a baseline level of mutations due to random mistakes, and exposure to ultraviolet light can add even more mutations, leading to cancer, he said. [How to Protect Yourself from Sun and Heat in 2017]

Cristian Tomasetti, an assistant professor of biostatistics also at Johns Hopkins, likened the three causes of mutations to typos that occur while using a keyboard. Some of those typos may be the result of the typist being tired or distracted; these can be thought of as the environmental factors, Tomasetti said on the podcast. And if the keyboard the typist is using is missing a key, that's a hereditary factor, Tomasetti said.

But even in a perfect environment, where the typist is perfectly rested and using a perfectly working keyboard, typos will still occur, Tomasetti said. And these represent the random mistakes.

What the study means for prevention

There are prevention strategies for cancers caused by environmental factors or inherited genes: A smoker can quit smoking to help lower his or her risk of lung cancer, and a woman who finds that she carries the breast cancer BRCA mutation may opt to have a preventative mastectomy.

These "primary prevention" strategies are considered the best way to reduce deaths from cancers, the researchers wrote in the study.

"We need to focus more on early detection, because these are not mutations" that can be avoided, Tomasetti said on the podcast.