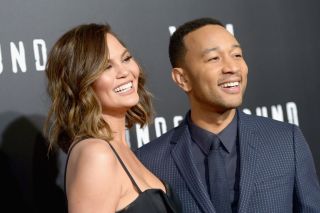 Model Chrissy Teigen recently revealed that she had postpartum depression, a condition that often left her with too little energy to leave the house for months.

In an essay for Glamour magazine, Teigen wrote that after her daughter was born in April 2016, she found herself feeling stressed, detached and sad, and she lacked her typical energy.

"Most days were spent on the exact same spot on the couch, and rarely would I muster up the energy to make it upstairs for bed," Teigen said. "John [her husband] would sleep on the couch with me, sometimes four nights in a row. I started keeping robes and comfy clothes in the pantry so I wouldn't have to go upstairs when John went to work. There was a lot of spontaneous crying," Teigen said. (Teigen is married to singer-songwriter John Legend.) [9 Celebrities Who Spoke Up About Depression]

And despite landing a book deal for her second cookbook, Teigen lost her appetite and could not taste-test her recipes, she said.

It wasn't until December that her doctor diagnosed her with postpartum depression, and she began taking an antidepressant. "[I] didn't think it could happen to me," she said, but "postpartum does not discriminate."

According to the Centers for Disease Control and Prevention (CDC), postpartum depression affects about 1 in 9 U.S. women shortly after they have a baby. Here are five important facts about the condition.

Postpartum depression is more than just the "baby blues."

After a woman has a baby, it's common for her to experience temporary symptoms such as mood swings, anxiety, problems sleeping and frequent crying, according to the Mayo Clinic. These symptoms are often referred to as the "baby blues." But these symptoms usually last only a few days, or at most two weeks, after which they get better without treatment.

In contrast, symptoms of postpartum depression continue for longer, and are more severe, the Mayo Clinic says. These symptoms may interfere with a mother's ability to take care of herself and her baby, according to the National Institute of Mental Health (NIMH).

Postpartum depression may be different from "regular" depression.

Some symptoms of postpartum depression are similar to symptoms of clinical depression that people can experience at any point in their lives. These symptoms include sadness, irritability, a lack of interest in doing most activities, sleeping problems, loss of appetite, and withdrawal from friends and family.

However, a woman with postpartum depression may also experience additional symptoms, according to the CDC. These symptoms include crying excessively, feeling disconnected from her baby, worrying that she will hurt her baby, feeling that she isn't a good mom or doubting her ability to care for her baby.

The cause is unclear, but hormones may play a role.

Researchers don't know exactly what causes postpartum depression, but there are likely several causes, according to the NIMH. One factor is hormones: Women's levels of estrogen and progesterone increase during pregnancy but drop rapidly after childbirth, the NIMH says. These chemical changes may trigger mood swings. In addition, it's typical for a new mother to lose sleep while caring for her newborn, and sleep deprivation may contribute to depression.

Many women with depression go undiagnosed.

The American Congress of Obstetricians and Gynecologists recommends that doctors screen for symptoms of depression at least once during pregnancy or in the postpartum period.

There are effective treatments for postpartum depression, including talk therapy and medication, according to the NIMH. These treatments can often reduce or eliminate symptoms.

It's important that women get treatment for the condition, because without treatment, postpartum depression can last for years, the NIMH says. The condition may also affect a mother's ability to care for and bond with her baby. Untreated postpartum depression is also linked with problems for children whose mothers have the condition, including difficulties with both sleeping and eating, as well as attention deficit hyperactivity disorder, according to the Mayo Clinic.