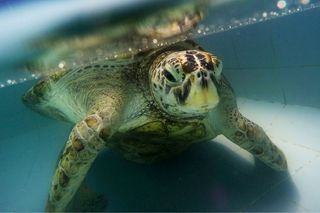 The female green turtle, nicknamed "Bank," underwent an operation to remove 915 coins from her stomach on March 6, 2017.
(Image: © Sakchai Lalit/AP)

A sea turtle in Thailand had to undergo an operation to remove 915 coins from its stomach, after it swallowed the loose change visitors tossed into its enclosure for good luck, according to the Associated Press.

In Thailand, there is a superstition that throwing loose change onto a turtle can bring a person longevity and good fortune. The swallowed coins formed an 11-pound (5 kilograms) mass in the sea turtle's stomach, and the weight of the coin ball eventually cracked Bank's ventral (underside) shell, leading to infection, the AP reported. [Images: Tagging Baby Sea Turtles]

Bank was then brought to Chulalongkorn University's veterinary facility, where five veterinary surgeons spent 4 hours removing the coins (many of which had corroded) while Bank was under general anesthesia, according to the AP.

"The result is satisfactory. Now it's up to Bank how much she can recover," Pasakorn Briksawan, a member of the surgical team, told the AP.

Bank will recover in Chulalongkorn University's animal hospital, where she will be kept on a liquid diet for two weeks, according to the AP.

Green sea turtles can have long lives, with an average life span of about 80 years, reported the AP. However, the species is listed as "endangered" by the International Union for Conservation of Nature (IUCN), with its population in the wild shrinking and at a growing risk of extinction. The IUCN says the green sea turtle's major threats include harvesting of its eggs, degradation of its habitats and entanglement in fishing gear.

"I felt angry that humans, whether or not they meant to do it or if they did it without thinking, had caused harm to this turtle," Chansue told the AP.