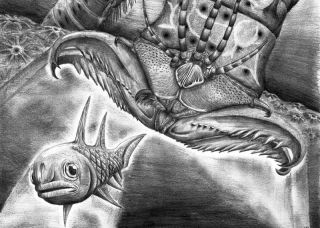 A newly discovered ancient worm that would have grown to more than 3 feet (1 meter) long is the oldest "Bobbit worm" ever discovered.

Bobbit worm is the colloquial term for giant eunicids, marine worms that still exist today. These creatures, which can grow as long as 10 feet (3 m), bury most of their bodies beneath the sand, waiting for prey to venture by so they can shoot out of their hole in a sneak attack.

The new species of worm lived 400 million years ago, during the Devonian period. It is known only from its jaws, which reached more than 0.4 inches (1 centimeter) in length. The jaw size suggests a giant body size, researchers reported Feb. 21 in the journal Scientific Reports. [Photos: Ancient Sea Monster Was One of Largest Arthropods]

"Gigantism in animals is an alluring and ecologically important trait, usually associated with advantages and competitive dominance," study leader Mats Eriksson, a paleontologist at Lund University in Sweden, said in a statement.

The fossil comes from an isolated outcrop on Rabbit Ridge near the town of Moosonee on Hudson Bay in Ontario, Canada. In 1994, Derek Armstrong, a researcher with the Ontario Geological Survey, took a helicopter to the outcrop and spent a few hours collecting rocks. The samples have been stored at the Royal Ontario Museum ever since.

An examination of three of these slabs of mudstone and wackstone revealed multiple jaw fossils, most preserved as empty-void spaces where the jaws had imprinted into the mud before decaying away. A few specimens preserved portions of the original jaws, as well.

The jaw characteristics were "unambiguously" unlike those of any known genus or species, the researchers wrote. They dubbed the new animal Websteroprion armstrongi. Armstrongi honors the man who did the fieldwork to collect the fossil; Websteroprion is in honor of Alex Webster, a bassist in the death-metal band Cannibal Corpse. As the researchers explain in their paper on the new species, Webster is a "giant" of a bass player, just as W. armstrongi was a giant at, well, being a worm.

"Besides our appetite for evolution and paleontology, all three authors [of the paper] have a profound interest in music and are keen hobby musicians," said Luke Parry, one of the study authors from the University of Bristol.

The specimens found in Ontario were likely entombed by a sudden influx of sediment, the researchers wrote. It's also possible, they said, that the jaws were shed throughout the worms' lifetimes. Though the jaws are consistent with a fearsome ambush predator, modern worms of this sort — known as polychaetes — have all sorts of diets and feeding habits, the researchers wrote, so the lifestyle of W. armstrongi remains mysterious.

However, it is clear that W. armstrongi was a heavyweight among its contemporaries. Other worm jaws from ancient polychaetes grow to lengths of about 0.08 inches (2 mm) at most.

"The new species demonstrates a unique case of polychaete gigantism in the Palaeozoic [era]," Eriksson said.