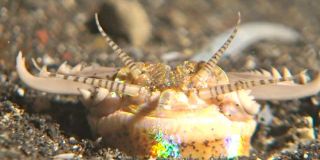 The Bobbit worm hunts at night by extending its antennae above its burrow, hoping to snatch passing prey. The worms are often up to 10 feet (3 meters) in length.
(Image: ©  copyright Department of Biomedicine, University of Basel)

Indo-Pacific fish have a cooperative defense against a real-life sarlacc: spit.

For the first time, researchers have observed small fish mobbing up against a worm that hunts like the Star Wars predator made famous in "Return of the Jedi." The giant Bobbit worm (Eunice aphroditois) buries its 10-foot-long (3 meters) bulk in the sandy seafloor, waving wormy antennae in the water and dragging passing fish into its den.

A single small fish is no match for this predatory monster, but a white-and-yellow species called Peters' monocle bream (Scolopsis affinis) gangs up to defend itself against the Bobbit worm, researchers reported Sept. 12 in the journal Scientific Reports. In doing so, it also alerts other fish to the worm's location, ruining the predator's chances for a meal.

"Concerning their mental capacity, fish are for the most part greatly underestimated," study researcher Daniel Haag-Wackernagel, a biologist at the University of Basel, said in a statement. Research into their behavior in their natural habitats continues to reveal big surprises." [See Photos of a Worm with 5 Shape-Shifting Mouths]

The Bobbit worm is an annelid, or segmented worm. It attacks its prey with sharp teeth and a toxin that can stun. As fearsome as they are, these worms don't move around much. They rely on the element of surprise to catch prey (and are much more subtle than the Star Wars sarlacc, which relied on the enemies of Jabba the Hutt to stay well-fed).

When Peters' monocle bream detect a Bobbit worm, they respond by hovering right over the entrance to the worm's burrow and spitting jets of water at the worm. When one bream starts this behavior, other breams join in, a phenomenon called "mobbing." Mobbing occurs when prey animals team up to drive off a predator. Birds do it frequently. Starlings, for example, will team up to dive-bomb hawks or owls to keep from being picked off, according to the Washington Department of Fish & Wildlife.

The study took place in the Lembeh Strait near Indonesia. The researchers dove to the black-sand bottom 90 times to observe four different Bobbit worms and the fish that inhabited the territory. In one case, a second species of bream, the monogrammed monocle bream (Scolopsis monogramma), joined the Peters' monocle breams in shooting water at the worm.

"This astonishing observation may indicate that mobbing by directing water jets to an ambushing enemy is more widespread," the researchers wrote.