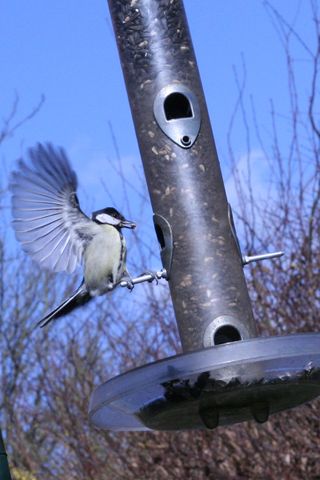 Great tits, a type of bird, will join in to defend their neighbor's nest from predators if they've known each other for more than a season.
(Image: © Samantha Patrick )

Like contestants on the game show "Survivor," the small birds called great tits form alliances with their neighboring great tits to defend their nests.

New research shows how the neighboring birds will work together to fend off predators such as woodpeckers — but only if they have been neighbors for over a year. Then they will collaborate in an anti-predator action called "mobbing."

"They give a loud alarm, they make these conspicuous, exaggerated flights, and they hover and swoop down on the predator. … It gets quite loud and the birds are very agitated," study researcher Ada Grabowska-Zhang, a graduate student at the University of Oxford in the United Kingdom, told LiveScience. "The more individuals participate in that behavior, the more likely they are to succeed."

The researchers studied a group of great tits that live in nesting boxes in Wytham Woods, a conservation site near the university in southern England. The researchers identified birds based on leg tags and nest boxes marked with wet paint, which transferred to the bird's feathers.

Grabowska-Zhang went out in the woods and stirred up some trouble for the birds. She would enter the territory of a pair of birds, and after the territory owner arrived and started swooping at her, she waited five minutes to see whether any other birds showed up.

"I used myself as a predator," Grabowska-Zhang said. "It's been shown that they treat humans as predators, and they respond just as strongly to a human as they would to a stuffed woodpecker."

In 14 out of 16 trials of birds with longtime neighbors, the neighbor showed up to help mob her off, she said. Out of the 16 trials of "unfamiliar" pairs of birds, only twice did a neighbor show up. When the predatory researcher approached the nest of a pair of first-year birds, though, none of their neighbors showed up.

"That is quite an interesting result, because you know that second-year birds in general will respond differently from first-year birds. The ones that are familiar will have an even stronger response," Grabowska-Zhang said.

This neighbor-alliance phenomenon, which helps keep predators and parental stress at bay, may explain why second-year nests for great tits have better success rates, the researchers said.

That's all well and good for the bird getting their neighbors to pitch in, but why would the neighbors stick out their own necks?

The study will be published April 25 in the journal Biology Letters.