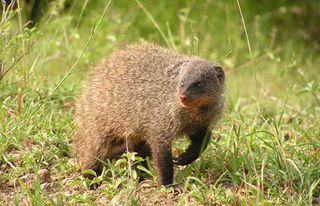 Mongooses, small cat-like carnivores, engage in brutal battles with neighbors. But a new study finds the animals are nowhere near as defensive with strangers.

Researchers captured video of the social animals as they sniff out enemies and send out alarm calls, showing that banded mongooses (Mungos mungo) aggressively defend against neighbors while allowing absolute strangers to cross right into their territories.

"Scent marks of neighbors are encountered regularly at the border of the home ranges, since they usually have an area of overlap," said lead study author Corsin M?ller of the University of Zurich.

Meanwhile, foreigners looking for a place to settle down also will usually wander into a resident's territory and leave their scent marks.

To compare the mongooses' different responses to neighbors and strangers, M?ller and his colleague Marta Manser studied a wild population of more than 200 banded mongooses in Queen Elizabeth National Park in Uganda. In separate trials, the scientists scattered samples of urine and feces in the center and along the edges of seven territories. The excrement was collected from two neighboring groups, strangers (or non-neighbors) and the resident group.

More than twice as many mongooses bellowed worry calls in response to neighbor scents than for those from strangers. The chatty calls elicited a response from clan mates that scuttled toward the spot and participated in the yelling. Also, the animals nose-inspected many more samples from neighbors compared with strangers.

So mongooses clearly treated neighbors as more of a threat than strangers.

In the case of banded mongooses, however, it turns out that neighbors can be the nastiest enemies, as they invade your territory, kick out same-sex individuals (reducing the pool of competitors for mates) and take over. So animals with intense conflict like this at their borders—as with the banded mongooses—would be expected to respond to neighbors with high aggression.

"I would definitely expect to find similar results in other social species," M?ller told LiveScience, "particularly species that engage in fierce fights with neighboring groups, such as wolves, lions, meerkats or chimpanzees."

The study was published online earlier this year by the Proceedings of the Royal Society B.