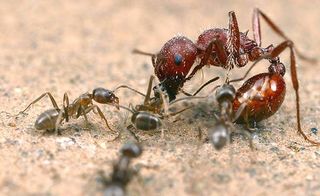 When it comes to differentiating a friend from a rival, invasive ants have it easier than humans: They can spot genetic differences, a new study shows.

Invasive Argentine ants form large supercolonies in California. These colonies stretch for hundreds of miles and include millions of nests. Ants from different nests of the same colony rarely show aggression toward each other. But those of different supercolonies clash often and engage in battles that result in the death of many workers.

The researchers collected dead workers at the territory borders of one of the smaller colonies at LakeHodges each week for six months. Battles in that area killed at least 15 million worker ants.

But when they placed ants from a distant location of the same colony next to each other, they didn’t fight.

“Our results are strong evidence that lack of genetic diversity permits supercolonies to arise,” said study co-author Melissa Thomas, now a researcher from at the University of Western Australia. “Workers cannot differentiate between nestmates and non-nestmates if they all seem the same. So ants from different nests in the same colony do not fight with each other.”

According to the researchers, keeping peace with their kin allows the ants to devote more resources to breeding.

“Territory defense is expensive both in time and workers,” Thomas said. “If nests invest this time and workforce into collecting resources and raising larvae instead of defending territories, then colonies should grow at a much faster rate.”

The study is detailed in the December issue of the journal Molecular Ecology.