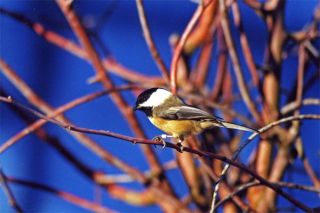 Nuthatch birds like this one can "eavesdrop" on chickadee calls.
(Image: © Chris Templeton.)

WASHINGTON (AP) -- Nuthatches appear to have learned to understand a foreign language -- chickadee. It's not unusual for one animal to react to the alarm call of another, but nuthatches seem to go beyond that -- interpreting the type of alarm and what sort of predator poses a threat. When a chickadee sees a predator, it issues warning call -- a soft "seet'' for a flying hawk, owl or falcon, or a loud "chick-a-dee-dee-dee'' for a perched predator.

The "chick-a-dee'' call can have 10 to 15 "dees'' at the end and varies in sound to encode information on the type of predator. It also calls in other small birds to mob the predator, Christopher Templeton of the University of Washington said in a telephone interview.

"In this case the nuthatch is able to discriminate the information in this call,'' said Templeton, a doctoral candidate.

The findings by Templeton and Erick Green, an associate professor of biological sciences at the University of Montana, are reported in this week's online edition of Proceedings of the National Academy of Sciences.

Templeton had been studying chickadees and noticed their varying response to different alarm calls so he recorded them and watched the responses.

He found the songbirds warned of greater danger from small, agile raptors such as the pygmy owl rather than something larger and less maneuverable, like the great horned owl.

Since chickadees and nuthatches live in many of the same areas and are similar in size, he decided to see how the nuthatches reacted to chickadee warnings.

He placed speakers at the base of trees where nuthatches were present, but where there were no live chickadees, so their actions wouldn't tip off the nuthatches.

When the recorded warning calls were played, he reports, the nuthatches reacted appropriately.

The nuthatches formed into mobs, flicking their wings and swirling around the speakers when the warning was for small predators than for larger ones.

Mobbing is a defensive behavior, Templeton said, when large groups of small birds pester a predator.

"They're not enough to kill you or hurt you, but they are enough to make you want to go and sit somewhere else,'' he said.

"Mobbing seems to be a way of teaching birds which predators are dangerous. But we have no idea how nuthatches learn to interpret the chickadee calls,'' he said.

But, he added, it appears to be learned behavior because the mobbing calls of the two songbird species are very different.

So, does it work the other way? Do chickadees understand the warning calls of nuthatches?

"It wouldn't surprise me, but no one's looked to see if nuthatches have a similar amount of information in their call. Perhaps that's a project I should do,'' he said.

Charles Eldermire of the Cornell Lab of Ornithology called the finding "another interesting example of interspecific communication brought to light.''

However, he said, "There is no way to tell if they are responding to 'encoded' information, or simply to intensity of the call.''

"My main criticism hinges on the fact that they tested two categories of very different sounding calls, one of which averages twice the number of D notes than the other,'' he said.

"In many ways, I would consider these two calls as distinct, and that, it would seem, might be where the argument of importance gets a little murky,'' said Eldermire, who was not part of the research team.

Andre Dhondt, a professor of ornithology at Cornell, noted that "birds in general respond to each other's alarm calls.''

Also, said Dhondt, who was not part of Templeton's research team, black-capped chickadees have been known to produce false alarm calls, causing other birds to fly away, leaving the cheating chickadees to enjoy a food source by itself.