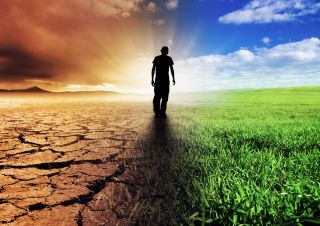 That's because climate change is both a root cause of mental health crises and a "threat multiplier," meaning that it makes existing mental health problems worse, said Dr. Lise Van Susteren, a psychiatrist in private practice and an advisory board member for the Center for Health and the Global Environment at the Harvard T.H. Chan School of Public Health.

Van Susteren spoke about the connection between climate change and mental health yesterday (Feb. 16) here at the Climate & Health Meeting, a gathering of experts from public health organizations, universities and advocacy groups that focused on the health impacts of climate change. [5 Ways Climate Change Will Affect Your Health]

For example, researchers have documented a link between extreme climate and weather events and higher levels of aggression, Van Susteren said. A 2013 study published in the journal Science found that increases in temperature and extreme rainfall are associated with increased levels of conflict between individuals, and between groups, she said.

One possible explanation for the link between rising temperatures and aggression is that higher temperatures increase levels of adrenaline in the body, which can contribute to aggression, Van Susteren told Live Science.

In her talk, Van Susteren also highlighted the link between rising air-pollution levels — which can be caused by rising temperatures — and a higher risk of neurological and psychiatric problems. When a person breathes in particulate matter from air pollution, that matter can enter a person's olfactory nerve and cause neural inflammation, she said.

Neural inflammation is linked to disorders found in all age groups, including Alzheimer's disease and cognitive disorders, she said.

One question that needs to be explored, however, is whether this neural inflammation also causes more conventional psychiatric disorders, such as anxiety and depression, Van Susteren told Live Science.

The American Psychological Association has reported that when pregnant women are exposed to air pollutants, their children are more likely to have symptoms of anxiety and depression, Van Susteren said in her talk.

In addition, research has shown that the average numbers of emergency room visits for panic attacks and threats to commit suicide are higher on days with poor air quality, Van Susteren said.

But she noted that not all of climate change's effects on health can be easily quantified in studies. "Not everything that counts can be counted," she said. Rather, there are "insidious" effects of climate change that could cause psychological strain on a societal level that will be hard to overcome, she said.

In one case, a 17-year-old boy in Australia developed such distress over climate change that he wound up hospitalized, Van Susteren said. The doctors who treated him called his condition "climate change delusion" in their report of his case, which was published in 2009 in the Australian and New Zealand Journal of Psychiatry. The boy had refused to drink water because he believed that it would cause millions of people in the drought-ridden country to die.

In her talk, Van Susteren stressed the need to take action on climate change; if action is not taken, she said, it will have profound effects on other children's mental health as well.