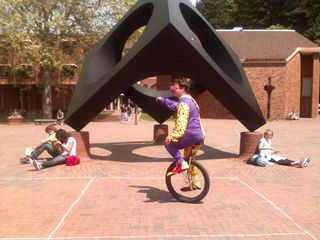 Even the sight of a unicycling clown isn't enough to grab the attention of walkers using their cell phones, according to a study being published in the December 2009 issue of the journal Applied Cognitive Psychology.
(Image: © Ira Hyman.)

Using a cell phone while walking is so distracting that people are likely to miss a clown riding a unicycle.

And yes, this is the result of real research, which involved mostly college-age students walking across a main campus square while a real clown performed. The research also found cell-phone users walk slower and weave about more than others.

Funny stuff aside, lead researcher Ira Hyman, Jr., of Western Washington University says the finding speaks to the dangers of cell-phone use while driving.

"If [cell-phone use] disrupts something as simple as walking, which I'm assuming most of these people have been doing a long time and are pretty proficient at generally, we know it's going to be a really difficult task driving," Hyman said.

Past research has suggested cell-phone use while driving can be as dangerous as drunk driving. But participants typically had specified conversations while operating a driving simulator in a lab setting, where other non-realistic factors might affect results. But "you don't want to force people to drive with a cell phone if you think it's dangerous," Hyman points out.

So in one part of the study, Hyman and colleagues had trained observers watch about 200 unwitting individuals walk across the school's central plaza.

Compared with individuals walking alone without phones, those walking in pairs, or folks listening to iPods, cell-phone users walked more slowly, changed direction and weaved more often and were less likely to acknowledge other individuals with a nod or wave.

It took cell chatters nearly 83 seconds to cross, while single participants without any electronic devices crossed in about 75 seconds and those with music players took some 74 seconds on average.

In another piece of the study, observers interviewed about 150 college-age individuals who had crossed the square and passed by a clown unicycling around a prominent sculpture. The clown was a student of Hyman's who happened to both unicycle and own a clown suit. "It's not everyday you have a student like that," Hyman said.

The observers asked walkers if they had noticed anything unusual, and for those who didn't, they asked specifically if they had seen the unicycling clown. Even when directly asked, the cell-phone users were less than half as likely to notice the clown as those listening to music players or single individuals without any electronics. People who walked in pairs were the most likely to see the clown.

He speculates, as do other researchers, that when talking to someone in person you both can modify your conversation based on the environment, so if a clown, say, pops up you can both look up. "That's not the case with the cell-phone conversations," Hyman said.

He added, "I think in addition to that, a cell-phone conversation is just harder to maintain; it takes more effort; it's harder to understand the other person; it's harder to get the timing right. It's just a much more difficult task."

The research will be published in the December issue of the journal Applied Cognitive Psychology.