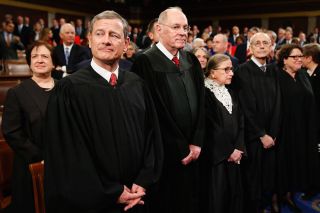 Politics aside, based on the 112 justices who have served on the U.S. Supreme Court thus far, what qualities should the ideal justice have?

That is, what traits do judges need besides knowing the law inside and out?

This question is on the minds of many as Supreme Court nominee Judge Neil Gorsuch prepares for his confirmation hearing this year. Here's a list of five admirable qualities that historians say have benefited justices and the courts they've served. [8 Supreme Court Decisions That Changed US Families]

Justices can serve on the Supreme Court for life, so it's vital they get along with and respect one another. But collegiality also serves another purpose: This quality can help a judge bring another justice to his or her side during a case, experts told Live Science.

"Justice [Clarence] Thomas, who is often in the minority, once said we have to keep cordial relations, because the person who votes against me today, I may need him or her tomorrow for another opinion," said Melvin Urofsky, the editor of the Journal of Supreme Court History.

This is why justices almost always sign a dissent with the phrase "respectfully submitted," Urofsky said.

Collegiality is paramount, said Mark Graber, regents' professor at the University of Maryland Francis King Carey School of Law. Justices need "the ability to understand and get along with people on the court," he told Live Science.

It's an understatement to say that justices on the Supreme Court need to be smart, but they also need to have a good sense of themselves, Urofsky said.

"Some of the worst justices who have been on the court were people who really didn't want to be there, didn't have a strong sense of who they were in terms of jurisprudence," Urofsky said. "[They] were scared or overawed of other people on the court," because they thought these other justices were smarter.

In addition to being bright, it's important for justices to be modest, Graber said. Justices need to understand "that on the Supreme Court, you cannot solve the problems of the world. You're a Supreme Court justice and not a celebrity."

Former Justice David Souter is a good example of an intelligent but modest justice, Graber said. Souter didn't go out of his way to pen sound bites like a celebrity, but "he had a good sense of what the court could do and what the court couldn't do," Graber said. "He was not a court leader, but his opinions demonstrated that he understood that judges are judging human beings and human beings are not perfect beings."

3. Respect for the court

In addition to having respect for one another, justices should respect the institution that they serve. This means understanding that the judicial branch is independent and one-third of government, Urofsky said.

"Practically every justice appointed has, at one time or another, disappointed the president who named him [or her]," Urofsky said. "I think Gorsuch already knows that, because he's been a federal judge."

Urofsky pointed to an example that played out earlier this month, when Gorsuch reportedly told Connecticut Sen. Richard Blumenthal that President Donald Trump's comments toward the judicial system were "demoralizing and disheartening." This was allegedly in response to a tweet the president posted calling federal Judge James Robart a "so-called judge" after Robart put a hold on Trump's travel ban on people from seven Muslim-majority nations.

"I don't think [Gorsuch] was playing up to the Democrats on that," Urofsky said. "I think he meant that."

(Later, White House press secretary Sean Spicer said Blumenthal was talking in general terms, not responding to anything the president had done.)

Presidents once nominated justices with diverse backgrounds, choosing senators, law school professors and prominent attorneys, Urofsky said. However, ever since Richard Nixon's presidency, most of the nominations have been judges from lower courts, largely because these individuals appear easier to confirm than nonjudges, Urofsky said.

"I think it's been a big mistake," Urofsky said. "We used to have judges who had some political experience."

By this, Urofsky said he doesn't mean that justices should, at some point, hold political office. Rather, like former U.S. Justices Louis Brandeis (who died in 1941) or Felix Frankfurter (who died in 1965), it might be helpful if justices had served as advisors to the president or in other branches of government, Urofsky said.

For instance, justices need to be mindful of how cases play out in the real world, as a politician would, Urofsky said. "What I would like to see in the ideal judge is someone who at least understands how the government actually works," Urofsky said.

Some past judges had some, but not all of these ideal qualities. For instance, Justice Frankfurter "may have been one of the brightest to ever go on the court," but his ego was large and he frequently lectured his fellow justices, Urofsky said.

"They wouldn't stand it," Urofsky said. "These are people who had strong egos of their own. [Former Justice] William O. Douglas, whenever Frankfurter used to start talking, would pick up his mail, go to the couch and sit there and take care of his mail.

"When Frankfurter was done, [Douglas] would say something like, 'I was ready to vote the other way, until Felix talked me out of it.' In other words, he would have voted with Felix until he heard Felix talk," Urofsky said.