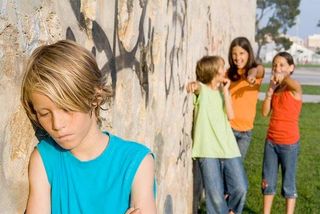 Bully victims show changes in gene activity in their brains, a finding that could explain social anxiety in many victims.
(Image: © Dreamstime)

Bullying and other types of chronic social stress affect gene activity in the brain, suggests a new study in mice. The changes may lead to persistent social anxiety.

"Just as alcohol affects your liver, stress affects your brain," said lead researcher Yoav Litvin of Rockefeller University in New York. The anxiety that can result from being teased and otherwise treated poorly is organically based, Litvin said, meaning it arises from physical changes in the brain.

In the study, adult male mice were basically set up to be humiliated. (Mice are thought to have roughly similar responses to stress as humans.)

The researchers placed a small, young test mouse in the cage of a bigger, older mouse. Due to the instinctive territoriality of mice, a fight always ensued, which the newcomer always lost. The fights were rarely vicious, but the younger mouse quickly understood he was lower down on the social totem pole. (The experiment caused more psychological stress then physical harm.)

The same mouse was subjected to 10 different cages on 10 different days — and was knocked around by the cage's resident bully each time. Then the researchers examined each mouse's brain, looking at areas associated with emotion and social behavior, such as the amygdala and the lateral septum, which is located near the middle of the forebrain. [10 Things You Didn’t Know About the Brain]

In bullied mice, the genes for hormone receptors responsible for making the brain sensitive to certain social stimuli had become more active, leading to the production of additional receptors. (Receptors act as hormone-specific doorways; when a brain region has more of them, more hormone molecules can come in at one time, causing the region to be more affected by the amount of hormone molecules in its midst.)

Specifically, the amygdala and lateral septum became more sensitive to vasopressin — a hormone involved in many different social interactions, including male-male aggression.

This extra sensitivity may cause a victim to feel scared even in situations when he is safe. At the end of the study, after spending a full recuperative day alone, the bullied mice froze and stayed far away from new, relatively friendly mice. [Why Bully Victims Suffer in Silence]

It is not yet known how long the effects last but the finding suggests that the victims of bullies may find it difficult to start friendships, Litvin said, due to persistent social anxiety.

Studies in animals and humans have previously shown that psychological abuse can have long-lasting consequences, he said.

"Still, these brain systems are dynamic," Litvin said. "What goes one way, usually can go the other way — although it may not be able to be totally reversed."

The researchers calmed the anxious mice by providing a specific drug that made their brains less sensitive to vasopressin. "But drugs are not the only way to go," Litvin said.

If the social anxiety is particularly strong, a positive relationship with a therapist may be the first step, Litvin said.

The research was published online March 11 in the journal Physiology and Behavior, and will be published in a forthcoming print issue of the journal.