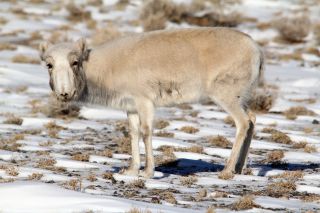 Scientists estimate the Mongolian saiga population to be about 10,000, which means this deadly infectious disease outbreak has killed about 25 percent of the endangered antelope.
(Image: © Buuveibaatar Bayabaatar/ Wildlife Conservation Society)

A critically endangered species of antelope is dying by the thousands from a deadly infectious disease outbreak in Mongolia, and scientists fear there could be "catastrophic consequences" for the threatened animals and their ecosystem.

Though the die-off rate has slowed, it could have repercussions throughout the local environment, said Amanda Fine, a veterinarian and associate director of the Wildlife Conservation Society's (WCS) Wildlife Health Program in Asia. [Photos: A 2015 Mass Die-Off of the Endangered Saiga Antelope]

"The situation is tragic and widespread," Fine said in a statement. "Along with the impact to the saiga population, this event has the potential to produce cascading catastrophic consequences on the ecosystem. For example, ibex and argali may be affected, and rare snow leopards may suffer the effects of a diminished prey base."

PPR, which is also known as sheep and goat plague, is highly contagious and can infect up to 90 percent of an animal herd once introduced, according to the Food and Agriculture Organization (FAO) of the United Nations. The disease is spread via body fluids, feces and close proximity, and symptoms include fever, anorexia, diffuclty breathing and more. After just a few days affected animals become depressed, very weak, and severely dehydrated, according to the FAO. The FAO and the World Organization for Animal Health are working to eradicate PPR by 2030, but the disease is known to have infected animal populations in more than 70 countries.

In Mongolia, a rapid-response team has begun collecting samples from the dead and diseased saiga in an effort to stop the spread of infection and determine how to support the species' recovery.

"The best way to prevent PPR is through further immunization of livestock in not only saiga range areas, but [also] other affected-species range areas," Fine said. "Stress-free conditions for recovering saiga and access to food and water resources should be provided in order to save the last population of Mongolian saiga from extinction."

The saiga face other threats aside from illness. People use the antelope's horns in traditional medicine, making the animals vulnerable to poaching. More than 90 percent of the saiga population has been lost in recent decades, according to WCS officials.