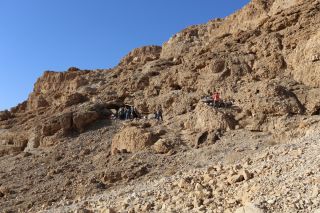 Archaeologists recently discovered a cave (entrance, shown at left) near Qumran in Israel, though most of the "Dead Sea Scrolls" in the cave had been taken in the mid-20th century.
(Image: © Oren Gutfeld & Ahiad Ovadia)

A cave that held Dead Sea Scrolls before they were stolen in the mid-20th century has been discovered near Qumran.

Inside the cave, archaeologists found a blank scroll along with the remains of jars, cloth and a leather strap. The researchers said they believe these items were used to bind, wrap and hold the scrolls.

Between 1947 and 1956, the Dead Sea Scrolls were found in a series of 11 caves located near the site of Qumran in what is now the West Bank. The scrolls contain copies of books of the Hebrew Bible along with community rules, calendars and astronomical texts, among other writings.

Archaeologists taking part in the excavation said they could tell from modern day pickaxes found in the cave that the newly discovered cave had been robbed. Thus, any scrolls that may have held writing were taken, the researchers said. The scientists added that they think the blank scroll found in the cave was, in ancient times, being prepared for writing.

"Although, at the end of the day, no scroll was found, and instead we 'only' found a piece of parchment rolled up in a jug that was being processed for writing, the findings indicate beyond any doubt that the cave contained scrolls that were stolen," said excavation director Oren Gutfeld, an archaeologist at the Hebrew University's Institute of Archaeology, in a statement.

"The findings include the jars in which the scrolls and their covering were hidden, a leather strap for binding the scroll, a cloth that wrapped the scrolls, tendons and pieces of skin connecting fragments, and more," he added.

Some of the thousands of fragments of Dead Sea Scrolls that are now in museums or private collections could have come from this new cave rather than the 11 previously known caves, Gutfeld said. "Finding this additional scroll cave means we can no longer be certain that the original locations (Caves 1 through 11) attributed to the Dead Sea scrolls that reached the market via the Bedouins are accurate," Gutfeld said in the statement.

The excavation of the cave is part of a larger operation in which the Israel Antiquities Authority is trying to find and excavate caves in the Judean Desert that may hold archaeological remains. The operation was sparked by the activity of looters in the Judean desert.

"The important discovery of another scroll cave attests to the fact that a lot of work remains to be done in the Judean Desert, and finds of huge importance are still waiting to be discovered," Israel Hasson, director-general of the Israel Antiquities Authority, said in the statement.

"We are in a race against time as antiquities thieves steal heritage assets worldwide for financial gain. The state of Israel needs to mobilize and allocate the necessary resources in order to launch a historic operation, together with the public, to carry out a systematic excavation of all the caves of the Judean Desert," Hasson added.