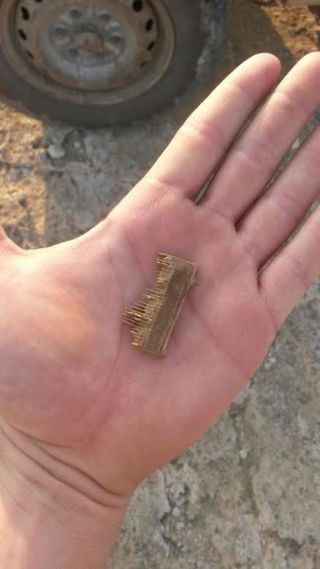 This 2,000-year-old lice comb was one of the artifacts recovered from the gang of cave looters in the Judean Desert.
(Image: © Israel Antiquities Authority)

A gang of robbers accused of trying to steal the Dead Sea Scrolls from a cave in the Judean Desert was indicted Sunday (Dec. 7) in Israel.

The group was caught red-handed looting historical artifacts, and the robbers were apprehended in what Israeli officials called a "dramatic capture" that played out along the high cliffs of a region of the Judean Desert known as the Leopard's Ascent.

"For many years now, gangs of antiquities robbers have been operating along the Judean Desert cliffs," Amir Ganor, director of the Israel Antiquities Authority's unit for the prevention of antiquities robbery, said in a statement. "The robbers attempt to locate and find the Dead Sea Scrolls, pieces of ancient texts and unique artifacts that were left in the caves." The artifacts are then sold for large sums of money in Israel and around the world, he added. [The Holy Land: 7 Amazing Archaeological Finds]

Members of the Israeli police force's search-and-rescue team were recently undergoing routine training on the cliffs when they noticed movement in a nearby cave. The team reported the incident to the Israel Antiquities Authority, which placed the cave under surveillance.

Not long after, the suspected robbers were observed again, equipped with metal detectors and other excavation equipment. Upon leaving the cave, the looters were immediately apprehended by Israeli officials, who confiscated several ancient artifacts, including a 2,000-year-old lice comb from the Roman period.

The gang of looters indicted yesterday is one of the main criminal groups operating out of the Judean Desert, according to Israeli officials. In addition to the rock-climbing gear used to reach the looted cave, the alleged criminals were found in possession of excavation tools — so-called break-in equipment, metal detectors, lighting equipment and enough food and water to last several days.

Using this gear, the looters caused excessive damage in a cave known in archaeological circles as the"Cave of the Skulls," destroying historical evidence that dates as far back as the Chalcolithic period, about 5,000 years ago, according to the Israel Antiquities Authority.

"What makes the Judean Desert so unique is its dry climate that enable[s] the preservation of rare leather, bone and wooden objects, including the Judean Desert Scrolls, pieces of parchment and papyruson which various texts were written, among them the Holy Scriptures, books of the Bible, legal contracts and historical stories," Ganor said.

The Judean Desert Scrolls, more commonly known as the Dead Sea scrolls, is a collection of texts discovered in the 1940s in a series of caves located in the northwest of the Judean Desert. Included in the texts were copies of the books of Genesis, Exodus, Isaiah, Kings and Deuteronomy. Archaeologists have also found other ancient scrolls in the region, some of which date back 2,000 years.

Keeping these artifacts out of the hands of looters has become a main priority of the Israel Antiquities Authority. The organization now conducts both open and covert surveillance of Judean Desert regions and tries to identify which caves are being targeted by looters. The recent apprehension and indictment of the artifact robbers mark the first time in decades that such criminals have been caught red-handed by authorities.

If the alleged cave robbers are found guilty, they could face up to five years in prison for excavating in antiquities sites without a license and destroying an antiquities site, according to the Israel Antiquities Authority. Israeli officials are also investigating other suspects who may be linked to the looting and destruction of antiquities sites in the region.