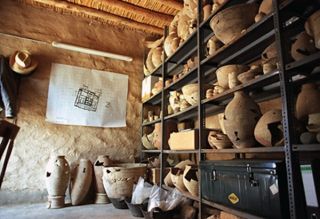 The finds in this excavation house near the Syrian site of Tell Sabi Abyad had been transferred to a museum or a depot in Raqqa.
(Image: © Leiden University)

Storehouses with more than twenty years' worth of finds from an archaeological dig in Syria have been ransacked amid the ongoing civil war, researchers say.

Archaeologists from Leiden University in the Netherlands had been excavating the ancient mounds at the northern Syrian site of Tell Sabi Abyad since 1986. The abrupt onset of war forced them to stop their research in 2011.

The team was recently notified by a report from Syrian Archaeological Service that armed men had plundered the depots where their finds were kept in the city of Raqqa. The report, however, did not specify what or how much was stolen, according to the university. [Photos: Damage to Syrian Ruins Seen from Space]

"I cannot check the extent of the damage because due to all the violence the area is too dangerous to enter," Peter Akkermans, a Leiden professor of Near Eastern archaeology, said in a statement. "It is occupied by fighters of the extremist Islamic organization ISIL. Since December of last year, I have not been able to contact the Syrian guard of our depots."

Akkermans' story is not unique. Many archaeologists who had worked in Syria before the war are struggling to assess the damage to their dig sites and other ruins in the historically rich region, which is home to the remains of early human settlements as well as the Assyrian, Persian and Akkadian and Roman empires.

Preliminary investigations into the toll on Syria's cultural heritage give a grim prognosis. Satellite images of Syria show extensive looting — even at popular archaeological sites like Apamea, a Roman city once trodden by tourists. The pictures also reveal tanks and military garrisons on top of ancient mounds, some of which contain thousands of years' worth of artifacts.

Tell Sabi Abyad contains artifacts from the Late Neolithic period (approximately 7000-5500 B.C.) and Late Bronze Age (approximately 1300-1000 B.C.). The most valuable finds from the site, such as the cuneiform tablets, had been transferred to a local museum in Raqqa. But the depots held artifacts like 6,000-year-old pottery and human and animal remains, two-thirds of which had not yet been studied.

Akkermans said his team will have to wait for the violence to end to get back to the site and the storage houses.

"Only then will we be able to determine the extent of the damage," he said in a statement.