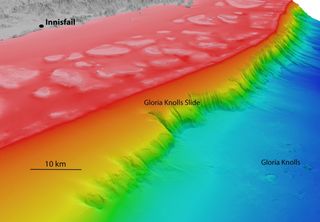 A view of the Gloria Knolls Slide off Queensland, Australia. Colors represent the depth of the features beneath the water surface, from red (shallow) to blue (deep), with the greatest depth reaching about 5,600 feet (1,700 meters).
(Image: © www.deepreef.org)

Perhaps luckily for creatures in the area, that tsunami wave would have been dampened by the surrounding reefs, the researchers said.

The slide would have sent about 7.6 cubic miles (32 cubic kilometers) of rubble plunging down a slope of the Australian reef. (For comparison, the volume of the Great Pyramid of Giza is about 91 million cubic feet, or less than one-100th of a cubic mile. That means a volume of some 12,000 Great Pyramids plunged to the seafloor during the prehistoric landslide event.)

The culprit of the slide? "We believe an earthquake of sufficiently large magnitude was the most likely trigger for such a landslide event," study researcher Robin Beaman of James Cook University in Queensland, Australia, told Live Science in an email. "As for, 'Would a similar phenomenon happen today?' the continental slope sediments appear stable under current conditions." [Infographic: Tallest Mountain to Deepest Ocean Trench]

The researchers discovered the remnants of the giant submarine landslide while mapping the seafloor along a margin of the Great Barrier Reef using 3D multibeam sonar, in which sound waves are bounced off the seafloor. In one spot, called the Queensland Trough, which was supposed to be relatively flat, they found eight knolls, some of which rose 330 feet (100 meters) above the seafloor with lengths of more than 9,800 feet (3,000 m), the researchers said.

That series of knolls, now called the Gloria Knolls Slide complex, were the result of the ancient landslide, the researchers found.

Samples from the knolls, which were submerged under nearly 4,000 feet (1,200 m) of water, revealed both living and fossil corals, Beaman said. The corals took up residence along the knolls sometime after the hilly terrain formed. "The oldest fossil coral we found, using isotope dating techniques, was 302,000 years old, therefore, making the landslide event that caused these knolls to be older than that age," Beaman told Live Science.

From the detailed, 3D maps of the area, the researchers reconstructed, or modeled, the landscape that would have existed before the slide. "So we can then simply do a before/after analysis of the volume of sediment that has been removed from this pre-slide surface," Beaman wrote.

The researchers noted that more research is needed to determine the risk of tsunamis related to these types of underwater landslides on the Queensland coast.