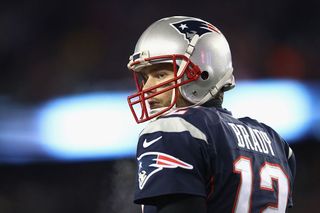 New England Patriots quarterback Tom Brady could be resting up for the big game in some special sleepwear: He wears "bioceramic pajamas," which are claimed to have health benefits such as reduced inflammation.

The pajamas, which can cost up to $200 for a top and bottom, are lined with bioceramic material that is supposed to reflect far-infrared waves back to the body, according to Under Armour.

Brady called the pajamas "game-changing" in a statement sent to Live Science from Under Armour. But how do these pricy pajamas work? And do they deliver on what they promise? [7 Scientific Tips for Staying Warm]

Certain materials, such as ceramics, can give off far-infrared radiation, said Rick Sachleben, a member of the American Chemical Society. These materials can absorb energy from the body and re-emit that energy back at a lower-energy wavelength, Sachleben told Live Science.

In the case of bioceramic materials, the idea is that the bioceramics absorb infrared radiation — which, simply put, is heat — from the body and re-emit that heat back as far-infrared radiation, which is of lower energy, Sachleben said.

Infrared radiation falls just below visible light on the electromagnetic spectrum, meaning its wavelength is beyond the range that humans can see, Sachleben said. With night-vision goggles, however, one could see infrared radiation, he added.

Far-infrared radiation is even lower energy (has a longer wavelength) than infrared, so it's even further out of the range that people can see, Sachleben said. This is the type of energy that's re-emitted by the bioceramic material.

"I'm fairly confident" that something like this would work to re-emit far-infrared radiation, Sachleben said. "If you take materials that are known to absorb infrared and radiate far infrared, and if you put them next to a heat source, they'll take the heat in and give it back at a lower energy," he said.

Sachleben noted that wearing clothing with bioceramic materials would be different than simply wearing, for example, a sweat suit to hold in heat. A sweat suit would keep body heat in, as opposed to specifically converting that heat to far-infrared radiation, he said.

For instance, previous research has found that sitting in a far-infrared sauna may improve heart function and reduce oxidative stress in patients with heart failure, according to a review of far-infrared radiation's effects, published in 2012 in the journal Photonics & Lasers in Medicine. Oxidative stress can damage the body's cells.

Several small studies have suggested that fabrics made with bioceramic materials may have benefits as well. For example, gloves made from such materials have been reported to help relieve arthritis pain, the review said. And in a study with just over 100 women, researchers found that wearing belts containing far-infrared–emitting materials could alleviate menstrual pain slightly more than wearing a placebo belt, the review said.

The authors of the review cautioned, however, that the biological effects of far-infrared radiation still need to be proven.