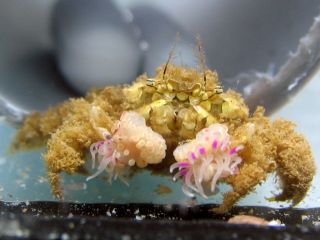 A boxer crab from the Red Sea clutching two sea anemones in each claw. The creatures are never found without their sea anemones, and new research shows they get them by stealing from each other and cloning them.
(Image: © Yisrael Schnytzer)

The mystery of a bizarre crab that is always found clutching two sea anemones in its claws may have been solved: The crabs clone their poufy accessories, new research suggests.

Lybia leptochelis, also known as a boxer crab or a pom-pom crab, will fight over the sea anemones and then split the remaining ones in two. The split sea anemones will regenerate over the course of a few days. The crabs then wield the stinging predators as a means of self-defense or to stun prey.

Since the 19th century, scientists have noticed these funny little creatures, less than an 1 inch long (2.5 centimeters) lurking under boulders throughout the ocean. The creatures are easy to miss, with their sea anemones and tannish rock coloration acting as camouflage. [Watch Video of the Boxer Crabs Cloning Sea Anemones]

"Boxer crabs of the genus Lybia have the remarkable habit of carrying a sea anemone in each of its claws by means of delicate hooks, slightly embedded in the sea anemone column," the researchers wrote in the paper published today (Jan. 31) in the journal PeerJ.

As for what the sea anemones get out of the partnership, past studies found that these "kept" anemones have greater access to oxygen and food (leftover scraps from the crab), which helps them grow. However, it's a double-edged sword: "The crabs regulate the food intake of their sea anemones, and consequently control their growth, maintaining small, 'bonsai' sea anemones for their use," the researchers wrote, noting that they had found this behavior in their past studies.

However, researchers didn't know exactly how the crabs got their decorations. To figure that out, Yisrael Schnytzer, a graduate student at Bar Ilan University in Israel, and his colleagues tracked down more than 100 boxer crabs from the Red Sea. Amazingly, every crab — even the baby crabs — were found clutching two sea anemones from the genus Alicia. [In Images: Amazing World of Deep Sea Yeti Crabs]

Back at their lab, the researchers conducted a series of experiments on the collected crabs. In the first, they took away one anemone from each crab. They found the single-anemone crabs splitting the sea anemone into two, then waiting with pom poms in claw for the anemones to regenerate to their full size over several days. Thus, the crab was inducing asexual reproduction in the sea anemones, organisms that normally don't just split willy-nilly.

In the next set of experiments, they created an aquarium cage fight, where one anemone-less crab was placed in the same tank with another holding two anemones. The crabs would wrestle and each would get one pom pom. Both crabs would then clone their anemones so they each had a pair.

The team also studied the crabs in the wild. There, genetic analysis revealed that the two anemones clutched in each claw had identical DNA, meaning they were clones. That suggests the crabs use the same splitting tactic in the wild as they did in the lab.