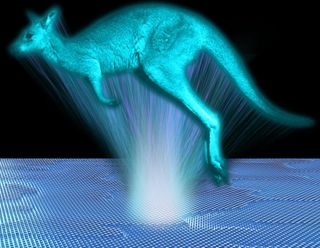 Concept artwork of the holographic image that was created with the ANU invention.
(Image: © Lei Wang, ANU)

Princess Leia's holographic plea in the classic film "Star Wars" inspired researchers to work toward a device that could project real-life sci-fi holograms. Now, the futuristic 3D imaging may be one step closer to reality.

A team of physicists at the Australian National University (ANU) invented a tiny device that creates the highest-quality holographic images ever achieved, the scientists said.

Study lead researcher Lei Wang, a Ph.D. student at the ANU Research School of Physics and Engineering, said he first learned about the concept of holographic imaging from the "Star Wars" movies. However, these futuristic-looking 3D images could be used for more practical ends than sending messages from a galaxy far, far away. [Photos: Microsoft's HoloLens Transforms Surroundings with Holographic Tech]

"While research in holography plays an important role in the development of futuristic displays and augmented reality devices, today we are working on many other applications, such as ultrathin and lightweight optical devices for cameras and satellites," Wang said in a statement.

Photographs and computer screens display information only in 2D, limiting views to flat images. Holograms, however, allow for the storage and reproduction of all information in 3D, and the technology relies on the ability to accurately manipulate light in three dimensions, the researchers said.

The ANU invention uses a new nanomaterial to create the 3D projections. Millions of tiny silicon pillars, each up to 500 times thinner than a human hair, act as pixel projectors to create the light-based 3D images, said co-lead researcher Sergey Kruk, a professor at the ANU Research School of Physics and Engineering.

"This new material is transparent, which means it loses minimal energy from the light, and it also does complex manipulations with light," Kruk said in the statement.

In lab tests, the device created tiny holograms ranging in size from 0.03 inches to 0.2 inches (0.75 millimeters to 5 mm) wide, at a distance of 0.4 inches (10 mm). While the technology is not yet ready to replace computer screens, with further research, the device could lead to new and better holographic technologies, the scientists said.

The device's ability to display the 3D holograms is only part of what makes it innovative, however, Wang said. Due to its miniature size, the invention could replace bulky camera components or help space missions by reducing the size and weight of optical systems, he said.

Details of the new study were published online Dec. 20 in the journal Optica.