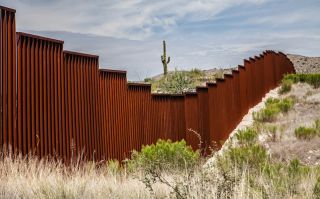 The U.S.-Mexico border in the state of Arizona.
(Image: © Chess Ocampo/Shutterstock)

Some species that live along the border, including the Arroyo toad (Anaxyrus californicus) and black-spotted newt (Notophthalmus meridionalis), are already endangered, according to the International Union for Conservation of Nature (IUCN).

These animals, as well as others such as jaguars, desert bighorn sheep and roadrunner could see their habitat split in two and their genetic diversity threatened if the wall is built, said Howard Quigley, Jaguar Program Executive Director and Puma Program Director for Panthera, a global wild cat conservation group.  [10 Species You Can Kiss Goodbye]

"[The wall would] prevent gene flow, which is ultimately bad for the species," Quigley told Live Science. For instance, if a population is cut in half, it could lead to inbreeding if not enough mates are available, he said.

Trump initially proposed that he would "build a great, great wall on our southern border," in June 2015, during the speech announcing his candidacy for president, according to Time magazine.

On Wednesday (Jan. 25), Trump signed an executive order that orders that the Department of Homeland Security use existing funding to start building the wall, according to Politico. However, Congress would need to approve more funding for the wall's completion, White House Press Secretary Sean Spicer said at a daily briefing, Politico reported.

About 700 miles (1126 kilometers) of border fencing already exists along the nearly 2,000 mile (3,218 km) long U.S.-Mexico boarder, according to ABC News. Most of this border was build after former President George W. Bush signed the Secure Fence Act of 2006.

Moreover, the REAL ID Act of 2005 allowed the Department of Homeland Security to waive all regulatory law, including environmental review, prior to building the boarder barrier, said Jesse Lasky, an assistant professor of biology at Pennsylvania State University.

"It meant that this large project was going to go through without any forethought in terms of all of the environmental aspects," Lasky told Live Science. "That seemed to be a glaring problem to me."

Lasky conducted his own investigation in the wake of the Secure Fence Act. That study, published when he was a graduate student of biology at The University of Texas at Austin, showed that the new fence and proposed fences along the border posed significant threats to wildlife, especially among populations living along the Texas Gulf and California coasts, as well as the Madrean archipelago — mountain ranges surrounded by a sea of deserts and grasslands in Arizona, New Mexico and Chihuahua, Mexico, Lasky said.

Lasky and his colleagues used publically available databases to see where different populations of animals lived along the border. Then, they checked which were listed as vulnerable, threatened or endangered, he said.

The species most at risk included four species listed as threatened globally or by both the United States and Mexico, and 23 other animals with small range sizes, Lasky found, according to a news release. These animals included the California red-legged frog and the jaguarondi, a small wild cat, he said.

Moreover, vegetative cover helps animals hide and protect themselves, but construction for the wall could destroy that, Lasky said in the 2011 study, published in the journal Diversity and Distributions.

If Trump's wall is built, it could push endangered animals and native animals with small habitats over the edge, Lasky said. [7 Iconic Animals Humans Are Driving to Extinction]

"If the populations on the border start disappearing, the functioning of these ecosystems could be reduced," he said.

For instance, if jaguars start disappearing (many live in Mexico, but one is in the United States, and more may come as the population grows), then their prey, such as deer and peccaries (small pigs also known as javelinas), will swell in numbers, Quigley said. What's more, studies show that when predators are absent from an ecosystem, prey tends to act less vigilant and can also alter an ecosystem when their numbers go unchecked, he said.

That's not to say that Panthera and other groups oppose human development, Quigley said. Rather that "we oppose development that obstructs that movement of jaguars," he said.

Other countries, other walls

The United States isn't the only country with walls. A new anti-refugee wall between Slovenia and Croatia is hurting the area's gray wolves (Canis lupus) and Eurasian lynxes (Lynx lynx) populations, and it may one day threaten the regions' brown bears (Ursus arctos), a June 2016 study in the journal PLOS Biology found.

In another instance, southeastern Australia erected 3,000 miles (4,800 km) of fencing in the 1950s for the purpose of protecting sheep from wild dogs known as dingos. But the idea backfired: the fence protected the sheep, but it also protected kangaroos, which had a major population boom and began competing with the sheep for grass, the BBC reported.