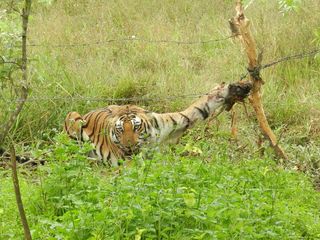 A female wild tiger is recovering at a zoo in India after getting ensnared in a barbed wire fence on a coffee plantation last week. Wildlife officials are commending how the potentially dangerous situation was handled.

The tigress was found on Dec. 4, with its left paw entangled in the fence in the village of Nidugumba in the state of Karnataka. Community members called in authorities, who swooped in to tranquilize the adult cat, untangle it and bring it to the Mysore Zoo. Veterinarians at the zoo are assessing the tiger's injuries, age, and health to make decisions about its future.

Officials with the Wildlife Conservation Society applauded the happy ending, as big cats often injure themselves further when they get stuck and thrash about trying to break free. Such incidents also can sow panic among community members, who might harass or kill the trapped animal and put themselves at risk of injury before authorities are called in. [Fun Facts About Tigers]

"Too often, in situations involving a large predator that is accidentally cornered in human-dominated landscapes, people can swiftly form mobs and attack the animal as well as impede forest officials handling the situation," Ullas Karanth, the WCS director for science in Asia, said in a statement. "This often ends tragically with the death of the big cat and sometimes injuries to people and forest staff."

For example, not far from Nidugumba, a tiger roaming near the Wayanad Wildlife Sanctuary in the state of Kerala prompted a chaotic mob on Dec. 2, and the big cat was shot dead by officials.

Nidugumba lies at the edge of Nagarahole National Park, where there are about a dozen tigers per 38 square miles (100 square kilometers). While such a high density is considered positive for conservation, it also increases the chances of tigers spilling out of the park and coming into contact with humans, according to WCS officials.

Tiger population numbers have fallen by about 95 percent over the last century, according to the World Wildlife Fund (WWF). Only about 3,200 tigers are thought to remain in the wild by some estimates and they face threats from habitat loss, lack of prey and poaching.