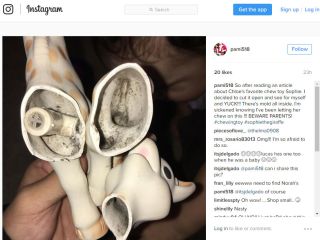 An image of Sophie the Giraffe with mold inside posted on social media.
(Image: © Photo courtesy of Instagram user Pami518)

Some parents recently got a shocking sight when they cut open their child's favorite teething toy, Sophie the Giraffe: The toy's innards were teeming with mold. But although the mold might look gross, it's unlikely to harm kids, experts say.

This week, Good Housekeeping reported several instances of parents cutting open Sophie the Giraffe and finding mold inside the toy. Now, a number of parents have taken to social media to share their pictures of Sophie's insides filled with black mold.

Reports of mold in these types of toys (that have a single hole in them) are not surprising, said Dr. Amesh Adalja, an infectious-disease specialist at the University of Pittsburgh Medical Center. "Mold is everywhere in the air," Adalja said. And if mold spores find their way inside a toy, they can proliferate because the inside of the toy is conducive to mold growth — that is, it's dark and warm, and traps moisture, he said. (Sophie the Giraffe has a single hole in the bottom, which means water could get inside if, for example, the toy is taken into the bath.)

But parents shouldn't be alarmed about mold inside a child's toy, Adalja said.

"It's unlikely that mold in a toy is harmful to children," Adalja told Live Science. "For the vast majority of humans, most molds pose no significant threats to them." [9 Weird Ways Kids Can Get Hurt]

However, people who have compromised immune systems, either because of a condition or medications, are at higher risk for infections from mold, Adalja said. Still, because these people represent only a small segment of the population, "I don't believe that this toy is going to pose much of a public health threat," he said.

A spokesperson for the company Sophie the Giraffe, said in a statement to Good Housekeeping that the toy is made from 100 percent natural rubber and that the outside of the toy should be cleaned with a damp cloth. "It should not be immersed in the water nor rinsed off, to prevent water from getting inside, as she may become damaged," the statement said.

Parents who want to reduce the chances of mold growing inside their kids' toys should follow the manufacturer's cleaning instructions, Adalja said.