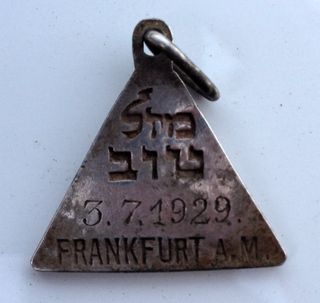 Archaeologists have discovered a German Jewish girl's pendant — nearly identical to the one that belonged to Anne Frank — in the ruins of a Nazi death camp in German-occupied Poland.

The discovery has sent researchers looking for more information about the young girl who once owned the medallion and her possible links to the Frank family.

The silver pendant was unearthed at the Sobibór extermination camp, where some 200,000 people were killed between 1942 and 1943. Archaeologists have been digging at the site since 2007 to salvage and study the remains of the camp before a memorial center and museum are built over parts of the site. [See Photos of the Nazi Camp Excavations and Pendant]

The excavations are aimed at helping historians more accurately reconstruct the atrocities committed at Sobibór, as the Nazis covered up the evidence of their crimes, demolishing all the buildings at the site and burning all related documents. So far, archaeologists have revealed once-hidden gas chambers and crematoriums. They have also found thousands artifacts, including personal items such as eye glasses, jewelry, dentures, hairpins and even a Mickey Mouse ceramic cup.

In October 2016, the archaeologists were digging in an area that they believe was once the barracks where female prisoners were undressed and had their heads shaved before being sent to walk on the cynically named "Himmelfahrtsstrasse," or "road to heaven," a path that led to the gas chambers.

One of the leaders of the project, Yoram Haimi, an archaeologist from the Israel Antiquities Authority, told Live Science that the remains of this building are in poor shape, with only the base of a few pillars surviving. But by sifting through the soil in this area, Haimi and his colleagues found a lot of jewelry — earrings, watches, rings and pendants — that were likely dropped by the women and girls forced to strip there 75 years ago.

The silver pendant found among these personal items is inscribed with a birthday — July 3, 1929 — along with the words "Mazal Tov" in Hebrew, and the city "Frankfurt A.M." (A.M. stands for "am Main," referring to the Main River.)

Using Yad Vashem's (The World Holocaust Remembrance Center) deportation database, researchers linked the pendant to a girl named Karoline Cohn, who was born on July 3, 1929, and deported from Frankfurt on Nov. 11, 1941, when she was 12 years old. The Cohn family was sent to the Minsk ghetto (in modern-day Belarus). Some records indicate that Karoline died in Minsk, Haimi said. The discovery of the pendant suggests she might have been among the 2,000 Jews who were sent to Sobibór to be killed after the Minsk ghetto was liquidated in October 1943. Or, if Karoline was already dead by that time, perhaps her mother or another relative brought the pendant to the extermination camp, the researchers suggested.

Anne Frank, the Holocaust victim famous for the diary she wrote while in hiding, was also born in Frankfurt in June 1929 (on the 12th) and had the same type of pendant.

"It's exactly the same, but only with a different birth date," Haimi told Live Science. "One of the possibilities is that maybe Cohn and Frank were relatives."

Haimi said researchers are still investigating whether there is really any connection between the two girls. He said there is a Cohn branch on the Frank family tree, but it does not appear to be same Cohn family. Haimi also said he doesn't know of any other pendants like these two, but perhaps by publicizing the latest finding, more examples will surface in private collections.

Yad Vashem and the Israel Antiquities Authority are now searching for living relatives who might have more information about Karoline Cohn; the team already has some leads in New York and Jerusalem, Haimi said.