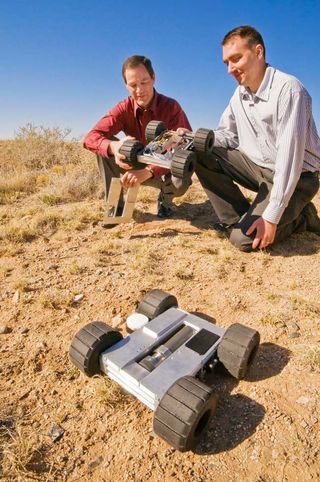 The four-wheeled Precision Urban Hopper robots are designed to navigate autonomously by wheels that work right-side-up or upside-down. Designed for urban warfare, they can jump onto or over obstacles of more than 25 feet. Jon Salton, left, and Steve Buerger put the through its paces.
(Image: © Randy Montoya, Sandia National Laboratories)

A new hopping robot under development at Boston Dynamics. Although it looks like a little radio-controlled car, it conceals an unusual secret. It can jump over obstacles fifty times its own size. The final version will be able to navigate autonomously and jump over obstacles of 25 feet or more.

“The Precision Urban Hopper is part of a broad effort to bolster the capabilities of troops and special forces engaged in urban combat, giving them new ways to operate unfettered in the urban canyon,” Jon Salton, Sandia National Laboratories program manager, said in a statement.

The demonstrated hopping capability of the robots allows the small unmanned ground vehicles to overcome as many as 30 obstacles that are 40-60 times their own size. Hopping mobility has been shown to be five times more efficient than hovering when traversing obstacles at heights under 33 feet (10 meters), which allows longer station-keeping time for the same amount of fuel.

The wheeled robotic platform adapts to the urban environment in real time and provides precision payload deployment to any point of the urban jungle while remaining lightweight and small. Researchers addressed several technical challenges, including appropriate management of shock forces during landing, controlling hop height from varying terrain including concrete, asphalt, sand and vegetation and controlling landings to limit tumbling.

It looks like the jumping robot is getting to be a popular idea. Researchers at the University of Tokyo have already created the Mowgli jumping frog robot and the Jollbot robot ball can jump in addition to bouncing and rolling.

This Science Fiction in the News story used with permission of Technovelgy.com.