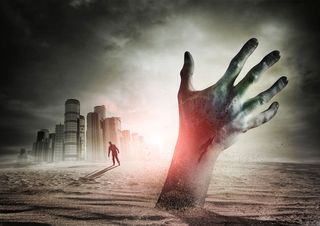 A tongue-in-cheek mathematical model reveals that zombies, if left unchecked, could wipe out humanity within 100 days.
(Image: © solarseven, Shutterstock.com)

A new article in a peer-reviewed student journal finds that the zombie hordes would take Earth's population down to a mere 273 survivors in 100 days.

The paper, published in the University of Leicester's Journal of Physics Special Topics, was a fanciful use of the so-called SIR model, which is used in epidemiology to simulate how diseases spread over time. It's not the first time zombies have been used as a public health metaphor. In December 2015, for example, the British medical journal The Lancet published a tongue-in-cheek paper titled "Zombie infections: epidemiology, treatment, and prevention." And a viral blog post from the Centers for Disease Control and Prevention urged zombie-apocalypse preparations as a metaphor for real-life disaster preparedness.

In the new analysis, the University of Leicester undergraduates assumed that each zombie would have 90 percent success at finding and infecting one human per day — a rate that would make the zombie virus twice as contagious as the Black Death, the plague that devastated Europe in the 1300s. [Zombie Animals: 5 Real Cases of Body-Snatching]

The researchers further estimated that each zombie could live 20 days without braaaaaains.

Assuming a starting population of 7.5 billion people, approximately the world's population today, the students calculated that it would take 20 days for a single zombie to start an epidemic of noticeable proportions. At that point, the pandemic would have begun. Assuming no geographic isolation, in fact, the human population would drop to 181 by day 100 of the epidemic, with 190 million zombies roaming around.

With some geographical isolation, the situation would be a tiny bit better for humans. Assuming the zombie virus had to spread through contiguous regions and that zombies were somewhat limited in their ability to travel (not leaving their current region until there were 100,000 zombies roaming there), human survivors would number 273 by day 100, the study found.

A more realistic model might assume that each zombie could find fewer human victims over time, the students wrote, because there would simply be fewer humans to find.

"We have also not included the possibility for the humans to kill the zombies," they wrote.

But never fear: In a follow-up paper, the students did just that. They extended the zombie life span to one year in order to up the challenge a bit, but also gave each human a 10 percent chance of killing a zombie each day. They also accounted for human reproduction, assuming reproductive-age women would be able to have a baby once every three years.