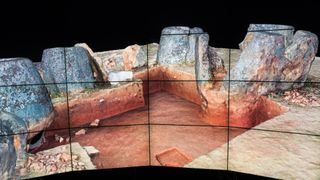 The aerial landscape images and other data from research at the Plain of Jars have been integrated into an advanced 3D simulation at the Cave2 virtual reality facility at Monash University.
(Image: © Plain of Jars Archaeological Project /MIVP Cave2)

Archaeologists have recreated an ancient burial site in virtual reality, to help them study hard-to-access locations at the so-called Plain of Jars site in Laos and the millennia-old relics it contains.

The researchers will also use virtual reality to study other archaeological sites at the Plain of Jars, many of them located where undetonated American bombs left over from the Vietnam War make it too dangerous to dig.

The virtual-reality project combines aerial video captured by a drone with geophysical data and records of archaeological excavations at "Site 1" on the Plain of Jars, near the town of Phonsavan in central Laos. It aims to create a virtual record of the unique landscape and its hundreds of carved stone jars, some of which measure up to 11 feet (3 meters) tall and weigh many tons, say the researchers. [In Photos: Exploring the Mysterious Plain of Jars Site]

The images and data have been integrated into a 3D video and data simulation at a room-sized, 360-degree virtual-reality facility at Monash University in Melbourne, Australia. Named Cave2, the facility is being developed for advanced "immersive visualization" applications in medicine, science and engineering.

Project co-leader Louise Shewan, an archaeologist at Monash University, said the main purpose of the virtual landscape is to preserve a step-by-step visual and scientific record of a major five-year archaeological investigation by Laos and Australian scientists at the Plain of Jars, which began with excavations at Site 1 in February 2016.

Shewan said the virtual landscape will also be used to explore other jar sites in rugged and forested territory, and in areas where many of the estimated 270 million cluster bombs dropped on Laos by American warplanes during the Vietnam War make traditional archaeology too dangerous. To date, only seven of more than 85 known jar sites in Laos have been cleared, and an estimated 80 million undetonated bombs are scattered across the country, according to the Laos government agency that oversees the clearance efforts.

"We certainly can't just go and put shovels into the ground," Shewan told Live Science. "[But] we can fly the drones through those sites, and put all that information and imagery into the Cave2 and make comparisons such as, is there a consistent placement between the jars, or between different types of burial markers?"

The excavations at Site 1 in 2016, led by Shewan and Dougald O'Reilly, an archaeologist at the Australian National University (ANU) in Canberra, established for the first time that the giant stone jars were linked to an ancient burial practice. They discovered the remains of dozens of people buried in communal and individual graves around some of the largest jars.

The researchers think the carved stone jars at Site 1 are around 2,500 years old, and that they were used by an Iron Age civilization to expose their dead relatives to the elements for a period of time before the bones were cleaned and buried. [The 25 Most Mysterious Archaeological Finds on Earth]

Shewan said the virtual landscape at the Cave2 facility will be updated with new data and the results of further excavations at the Plain of Jars site, so the researchers can revisit and review their archaeological fieldwork from more than 4,800 miles (7,700 kilometers) away in Melbourne.

"Long after we leave the field, we can continue researching, and we can actually be there with all our team members and go through the excavation again, and pick up on things that we've missed," she said. "It's also great for teaching, to be able to recreate the excavation … It really is virtual-reality archeology, because we've got the time sequence of the excavation, and you can speed that up and see the trench go down in 10-centimeter [4 inches] steps."

The images and archaeological data recorded in the Cave2 simulation will also serve as a digital record of scholarship about the Plain of Jars in support of its designation as a UNESCO World Heritage Site, which is an ongoing process, Shewan said. (The United Nations Educational, Scientific and Cultural Organization — or UNESCO — designates sites as World Heritage Sites if they meet certain criteria for representing natural, historical or cultural significance.)

The Laos government hopes the region's World Heritage status will stimulate tourism and spur further scientific research into the Plain of Jars and other archaeological sites.

For now, the virtual Plain of Jars can be viewed only at the Cave2 facility in Melbourne, but Shewan hopes that 360-degree aerial footage of the site will be made available to the public or be integrated into a museum exhibition.

She said the ongoing laboratory research on the samples from the latest excavations includes efforts by ANU geochemist Richard Armstrong to determine the geographic origin and accurate age of some of the jars at Site 1, by analyzing the radioactive decay of uranium into lead in traces of the mineral zircon in the rocks from which they were quarried.

Shewan's own skeletal-chemistry research will focus next on strontium isotopes in human teeth from the graves at Site 1, which could provide clues about the identity of the mysterious jar makers, of whom almost nothing is known except their unusual burial practices.

"We'll be able to work out where these people were living and what areas they were accessing their food from, based on the geological signature — and that will be a really useful piece of information, because at the moment, we don't have any habitation sites, and so we know nothing about these people at all," Shewan said.