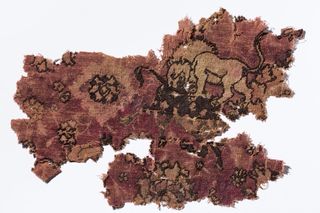 Fragments of carpet were discovered in a 17th-century shipwreck at the bottom of the sea off the coast of the Netherlands.
(Image: © Netherlands Institute for Art History (RKD), Vicky Foster)

Fragments of a carpet that had been buried at the bottom of the sea for nearly 400 years are now on display in the Netherlands.

The carpet, which is made from silk and wool, is decorated with flowers and animals, including lions. Based on the patterns, colors and weaving techniques, art historians concluded that the fabric was likely manufactured in Lahore, in present-day Pakistan, during the second quarter of the 17th century, according to the Kaap Skil museum on Texel Island, which started exhibiting the rare textile this week.

During the Dutch Golden Age, ships traveling to and from Amsterdam would stop around Texel Island in the Wadden Sea. Because it was such a heavily trafficked area, the waters around the island are now littered with ships that sank during rough storms. [See Photos of the Carpet & Opulent Royal Booty Unearthed from the 17th-Century Shipwreck]

That's where a group of local divers recently found the Lahore carpet among other textiles in a shipwreck. Delicate fabrics typically don't survive for very long at the bottom of the sea, but the so-called Palmwood Wreck was covered in sand, resulting in unusually good preservation, the researchers said.

"It'salmost like having the fragments of an original Rembrandt in front of you," textile researchers Ebeltje Hartkamp-Jonxis and Hillie Smit, who examined the carpet, said in an emailed statement from the museum.

Earlier this year, the Kaap Skil museum started displaying a complete silk gown that was also recovered from the wreck. The dress had been preserved in a clothing box that was packed with many other items, including a cloak, stockings and bodices adorned with gold and silver thread.

The sunken ship has also yielded crates that likely once contained incense or myrrh. Also within that shipwreck, divers have found a lice comb, Italian pottery, a beaded handbag and an intricately decorated "scent ball," which would have been worn around a person's neck to diffuse the smell of herbs or flowers.

Leather covers of books (the pages had disintegrated) were salvaged from the wreck, too. They bear the coat of arms of the English King Charles I, suggesting that perhaps the cargo onboard the ship belonged to the royal Stuart family. The lavish wardrobe, which seems to have belonged to a "fairly hefty" woman, has been linked to Scottish lady-in-waiting Jean Kerr, Countess of Roxburghe, the confidante of the Queen Consort of England, Henrietta Maria, according to researchers working with the museum.

The carpet fragments will be on display in an exhibition called "Diving into Details" until mid-February. Then, the textile pieces will be sent to the Archaeological Center of the Province Noord-Holland (North Holland) for further research, according to a statement from the museum.