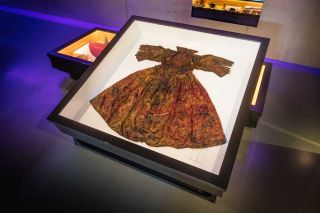 A box filled with perfectly preserved clothing from the English Royal Court was recovered from a 17th-century shipwreck.

The opulent wardrobe, which includes a gorgeously decorated gown in near-perfect condition, is currently on display in the Netherlands. The lady who wore this lavish wardrobe was likely the Scottish lady-in-waiting Jean Kerr, Countess of Roxburghe, the confidante of English Queen Henrietta Maria, the researchers said in a statement.

"We have seldom — perhaps even never — witnessed a find of this scale in a maritime context," Maarten van Bommel, a conservation scientist at the University of Amsterdam, said in a statement. [See Images of the Stunning 17th-Century Royal Wardrobe]

The collection serves as a kind of time capsule that reveals the clothing tastes of the elite of the period, the researchers said in the statement.

Treasures beneath the deep

The shipwreck was unearthed in the Wadden Sea, just off the island of Texel, which is part of the Netherlands. The narrow waterway was a tempting place for sailors to drop anchor while waiting for cargo or to wait out squalls. But as a result, the waterway is a graveyard where hundreds of ships sank during rough storms. The sandy seafloor, which can bury artifacts and other objects, also helps to preserve shipwrecks. Winds and weather occasionally jostle the sands, revealing previously hidden wrecks.

In the current shipwreck, maritime archaeologists unearthed a clothing box filled with many different pieces of apparel, including a cloak, stockings and bodices decorated with staggering amounts of gold and silver thread. All of the clothing was of approximately the same size, suggesting that it was probably the wardrobe of one woman, of "fairly hefty size," researchers say. The box also included Italian pottery, a beaded handbag, a silver chalice and perfumes, as well as book covers emblazoned with the seal of the Royal House of Stuart in England.

However, the identity of the wardrobes' owners remained a mystery until historians Nadine Akkerman from Leiden University in the Netherlands and Helmer Helmers from the University of Amsterdam put the pieces together. The experts on the English House of Stuart found a letter written on March 17, 1642, from Princess Elizabeth Stuart, who mentioned that her sister-in-law Henrietta's baggage ships had gone down, carrying vessels from her private chapel, as well as the clothing of her ladies-in-waiting.

Based on the size and more matronly style of the clothing, the team deduced that the clothes belonged to Kerr, the elder of the two ladies-in-waiting.

The princess was in the Dutch Republic ostensibly to send her 11-year-old daughter Mary to her new husband, William II, Prince of Orange. In reality, she was there to sell the royal jewels to buy weapons for King Charles, who was embroiled in the English Civil War.

The showstopper in the collection is a Japanese silk damask dress, or tabbert. The lack of silver or gold threading suggests that the dress was everyday wear for its high-status owner. Its ornate bodice fed into a large, fluffy collar. It had loose, long sleeves capped with ornate shoulder decorations, a v-shaped ruffle at the hips, and a very long train, according to the statement. The style of the dress is somewhat reminiscent of fashions worn by Queen Elizabeth I in paintings.

It's extremely rare to find such well-preserved textiles from the 1600s, especially if they've been submerged in water for centuries, the researchers said. However, the dress is not in perfect condition. The armpits have rips in the seams, and there are some holes in the dress. Some of the wear patterns suggest that the dress was actually worn, unlike other items found in the box. In addition, the dress has been creased and folded in the same position for centuries, making it hard to see what it would have looked like when worn. However, ironing is out of the question, as any heat could irreparably damage the delicate fibers in the dress, the researchers said.

Those in the Netherlands can see the stunning robe, along with other items from the collection, through May 16 at the Museum Kaap Skil, a maritime and beachcomber museum in Oudeschild, the Netherlands. After that, the collection is scheduled to be sent to Hilde's House in Holland for archaeological preservation and study, the researchers said.