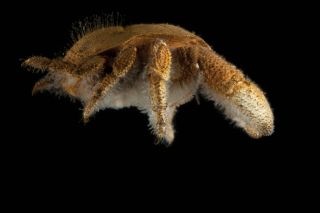 A species of hairy-chested Hoff crab was discovered at the Longqi vent in the Indian Ocean.
(Image: © David Shale)

Strange and alien-like creatures, including a hairy-chested crab, populate a deep-sea vent in the Indian Ocean.

The first remotely operated vehicle exploration of the Longqi vent field — the area around a fissure in the seafloor that spews superhot and mineral-laden water — reveals new species of snail and limpet, as well as the hairy-chested Hoff crab (Kiwa) The vent field, whose name means "dragon breath" in Mandarin, is located 1.7 miles (2.8 kilometers) deep, about 1,200 miles (2,000 km) southeast of Madagascar.

Some of the animals discovered by the ROV expedition have been seen at other vents thousands of miles away or have close relatives at those far-flung vents, including the Hoff crab, which was nicknamed for the hirsute actor David Hasselhoff upon its discovery in Antarctica's East Scotia Ridge. [See Photos of the Black Smokers and Bizarre Vent Creatures]

Connectivity in the deep

A research team led by Jon Copley of the University of Southampton in the U.K. launched the ROV from the research vessel RRS James Cook in November 2011, just four years after an autonomous vehicle took the first photographs of the Longqi field in 2007. Using the ROV, the team collected samples of the deep-sea fauna living around "black smoker" vents — which spit out dark, iron-sulfide-rich fluids at temperatures of about 570 degrees Fahrenheit (300 degrees Celsius) — as well as cooler "diffuse flow" vents, which release clear fluids. Some of the vents are several stories tall, including a black-smoker chimney called "Jabberywocky" that towers 19 feet (6 meters) above the seafloor, the researchers reported Dec. 15 in the journal Scientific Reports.

Around these mineralized vent spires the researchers discovered a world rich in wormy and squirmy creatures. Among the most common of these species was the deep-sea snail Gigantopelta aegis. Also present in large numbers was the mussel Bathymodiolus marisindicus. The researchers discovered eight species of segmented, bristled worms known as polychaete worms, including two species of scale worm found on the East Scotia Ridge, about 3,700 miles (6,000 km) away.

"Finding these two species at Longqi shows that some vent animals may be more widely distributed across the oceans than we realized," Copley said in a statement.

Another worm at Longqi, Hesiolyra bergi, had previously been seen at vents on the East Pacific Rise, the mid-ocean ridge that runs north to south in the Pacific Ocean, more than 6,200 miles (10,000 km) from Longqi.

Other species at Longqi weren't so new to science. The scaly-foot gastropod (Chrysomallon squamiferum), known for the iron-rich scaled armor on its foot, has been seen at black smokers on the Central Indian Ridge. (Longqi is on the Southwest Indian Ridge.) So have the small shrimp Rimicaris kairei and Mirocaris indica. One scale worm seen frequently at Longqi, of the genus Branchipolynoe, appeared to be the same, genetically, as an unnamed species from the Kairei vent field on the Central Indian Ridge, the researchers wrote.

"We can be certain that the new species we've found also live elsewhere in the southwest Indian Ocean, as they will have migrated here from other sites, but at the moment, no one really knows where, or how well-connected their populations are with those at Longqi," Copley said.

The vents at Longqi are of interest to mineral and mining companies because of their copper and silver deposits, but the new research suggests the need to research the area fully before extracting these resources, Copley said.

"Our results highlight the need to explore other hydrothermal vents in the southwest Indian Ocean and investigate the connectivity of their populations, before any impacts from mineral exploration activities and future deep-sea mining can be assessed," he said.