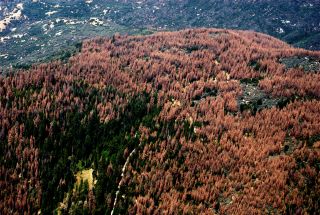 More than 102 million trees on 7.7 million acres of California’s drought-stricken forests have died since 2010.
(Image: © USFS)

The lingering drought in California has killed more than 100 million trees, according to the U.S. Forest Service's latest aerial survey.

The recent death count found that 62 million trees have died just this year in California, bringing the six-year total to more than 102 million. More than five years of drought are to blame for the tree deaths, scientists said, adding that tree "fatalities" increased by 100 percent in 2016. While die-off is expected under drought conditions, the rate of the forests' death is faster than scientists expected, according to U.S. Forest Service (USFS) officials.

The agency said that millions of additional trees are expected to die in the coming months and years. California's drought has affected 7.7 million acres of forests, putting the region's whole ecology at risk, the scientists said. [Dry and Dying: Images of Drought]

"These dead and dying trees continue to elevate the risk of wildfire, complicate our efforts to respond safely and effectively to fires when they do occur, and pose a host of threats to life and property across California," U.S. Secretary of Agriculture Tom Vilsack said in a statement.

With more dead trees in forests, wildfires have a "fuel buildup" that could lead to large, unpredictable fires, Vilsack said. California has experienced longer, hotter fire seasons in recent years, and USFS scientists said that they expect tree mortality to continue at elevated levels in 2017.

The fight against wildfires and the need for other safety measures have also taken a toll on the USFS budget. In the 2016 fiscal year, California redirected $43 million to drought and wildfire restoration, and 56 percent of the USFS' total budget last year was used for fire management, the agency said. The USFS anticipates a rise to 67 percent by 2025, officials added.

Limited budget resources and a changing climate have hampered the USFS' ability to address tree mortality, according to Forest Service officials. "We must fund wildfire suppression like other natural disasters in the country," Vilsack said.

A majority of the 102 million dead trees are located in just 10 counties in California, in the southern and central Sierra Nevada region. However, tree mortality is increasing in northern areas as well, the agency said.

The drought conditions, along with a rise in bark beetle infestations and warmer temperatures, led to such historic levels of tree die-off that California Gov. Jerry Brown declared a state of emergency in October 2015. The unprecedented tree die-off also resulted in the formation of a Tree Mortality Task Force, which is focused on the safe removal of dead and dying trees.

"California is facing the worst epidemic of tree mortality in its modern history," Brown said in a letter to Vilsack in 2015. "A crisis of this magnitude demands action on all fronts."