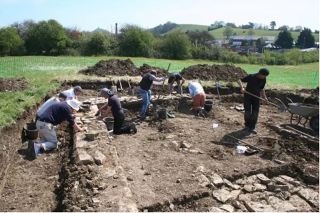 A group of volunteers excavates the monastery with hills known as Glastonbury Tor and Wearyall Hill in the background.
(Image: © South West Heritage Trust)

More than 1,400 years ago, monks buried their male brethren — as well as one woman who was likely a nun — beneath what is the earliest known monastery on record in the British Isles, new research shows.

Archaeologists have known about the site, called Beckery Chapel, since the 1880s, but a re-examination of the skeletons buried there revealed its outstanding age. According to radiocarbon dating, the skeletons date to the 5th century or early 6th century A.D., making the chapel, located in Somerset (a county in southwest England), the oldest known monastery in the United Kingdom, the researchers said.

The finding gives the chapel yet another claim to fame. Beckery is already celebrated for being the place where the legendary King Arthur is reported to have had a vision of Mary Magdalene and the infant Jesus, according to the English historian William of Malmesbury, who wrote about the alleged event in A.D. 1135. [Photos: Medieval Skeletons Unearthed Near Saint's Tomb in England]

But Arthur aside, the new finding tells researchers more about the site — for instance, that it was built before the region was conquered by the Saxon kings of Wessex in the 7th century, the researchers said.

Beckery Chapel is named after St. Brigid (A.D. 453 ― 524), an Irish nun who is said to have founded a handful of monasteries in Ireland. The saint reportedly visited the chapel in 488, according to William of Malmesbury and John of Glastonbury, a 15th century monk and historian.

St. Brigid (also spelled Brigit) is said to have left behind relics, including a bag or wallet, a necklace, a small bell and some weaving instruments, according to the South West Heritage Trust, the organization that conducted the new research. Pilgrims traveled to a medieval chapel that was later built at the  site, with some of them crawling through a hole in the chapel's side that was believed to grant them forgiveness, archaeologists with the South West Heritage Trust said.

After the original chapel was discovered in the 1880s, the British archaeologist Philip Rahtz dug a little deeper in the 1960s, eventually finding a cemetery with at least 50 skeletons. Nearly all of the skeletons were adult men, indicating it was a monastic graveyard, the researchers said. The only exceptions were three skeletons — two juveniles who were likely novices, and a woman thought to be a nun or a patron, according to the archaeologists.

In May 2016, a community group of trained volunteers dug an area encompassing about 215 square feet (20 square meters) in order to excavate the remains of seven individuals so that researchers could radiocarbon date the bones. Six of the individuals came from graves, and one human jaw, belonging to another individual, was found in a dirt pile from the 1960s excavation, the researchers said.

Radiocarbon dating showed that monks were buried from the 5th century or early 6th century until the early 9th century, the researchers found. It's possible the monks stopped using the site after Vikings attacked Somerset in the later part of the 9th century, they added.

"It is great to show that a community excavation can produce results that revolutionize our view of the origins of monasticism in Britain and Ireland," site director Richard Brunning, a senior archaeologist at the South West Heritage Trust, said in a statement. "The ancient origins of the Beckery site may explain why later medieval writers linked it to figures such as King Arthur and Saint Brigid." [Photos: Amazing Irish Artifacts from Rathfarnham Castle]

In addition, a bone analysis showed that one of the individuals had severely fractured his upper left arm. The bone had healed, but it was still deformed, the researchers said.  Moreover, all of the skeletons showed that the men had endured difficult, physical work during their lives, the trust reported.

Furthermore, an isotope analysis (an isotope is a variation of an element that has more neutrons in its nucleus) showed that six of the men ate a lot of meat and dairy products, while the other man ate much less meat and dairy. The researchers plan to do another isotope analysis soon to determine whether the men grew up nearby, or whether they came from afar, the researchers said.

The excavation was paid for, in part, by the Avalon Marshes Landscape Partnership, which is funded by the U.K. National Lottery.